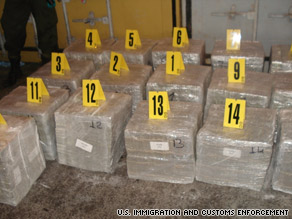 The U.S. agency, commonly called ICE, says the seizures were made September 9-18. It called them the largest seizure of cash ever found in shipping containers destined for Colombia and the largest for the agency since its inception.

• On September 9, Colombian customs inspectors and Colombian national police, acting on intelligence reports, seized $11.2 million in U.S. currency hidden in two shipping containers. The containers were aboard a vessel that sailed from the Port of Manzanillo, Mexico, and was headed to Buenaventura, Colombia. Colombian customs inspectors said it was the most cash ever seized by police at a port in the nation.

• On September 10, a second seizure of U.S. currency estimated at $11.2 million also was made at the Buenaventura port.

• On September 11, a shipment of $11 million was discovered hidden inside two shipping containers at the Port of Manzanillo.

• On September 18, authorities seized $2.15 million in $100 bills concealed inside two containers aboard a vessel that arrived in Manzanillo.

"This seizure represents a bad day for organized crime," ICE Director John Morton said at a Monday news conference in Washington. "Forty-one million dollars is not a rounding error. The loss of that kind of money hurts."

All of the money was concealed in sacks of fertilizer chemicals in containers transported on commercial ships, Morton said.

The ports of Buenaventura and Manzanillo are key points along a well-known route used for smuggling cocaine northward to Mexico and then on to the United States, and for sending cash back into Colombia, where most of the cocaine originates, ICE said in a news release.

Morton called the smugglers "very, very sophisticated," saying they were using the lawful shipping trade to send drug profits from the U.S. through Mexico to Colombia.

Morton said the money will be forfeited in accordance with the laws of the nations where it was seized, with Colombia keeping $28 million and Mexico getting $13 million.

"None of these monies will be forfeited to the United States," he said.

While large, this month's cash seizure is not a record. In March of 2007, officials in Mexico officials confiscated $207 million in cash in what was then called the largest drug-related cash seizure in history.

All About Colombia • U.S. Immigration and Customs Enforcement • Mexico