Arrest made in slayings of U.S. citizens in Mexico

MEXICO CITY, Mexico (CNN) -- The Mexican military has detained a suspected leader of a notorious drug-trafficking family in connection with the July slayings of two U.S. citizens. 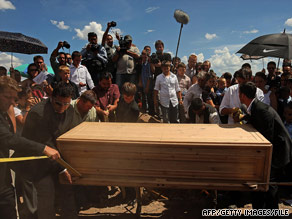 Benjamin LeBaron is buried in Galeana, Mexico, in July.

Jose Rodolfo Escajeda, known as El Rikin, was taken into custody Friday in Nuevo Casa Grandes, in Chihuahua state, according to a military statement.

Escajeda is an alleged ringleader of a drug-trafficking family that runs a 120-mile smuggling corridor on Mexico's border with Texas, according to the Drug Enforcement Administration. He has been indicted by the U.S. government, DEA said.

U.S. citizens Benjamin LeBaron and his brother-in-law, Luis Widmar, were beaten and shot to death after armed men stormed into their home in the town of Galeana, Mexico. Local media reported in July that a note found on LeBaron indicated the slayings were in retribution for the capture of 25 drug suspects in a nearby town.

The LeBaron brothers belonged to the "Community of LeBaron" in Galeana, a township founded by excommunicated Mormons.

LeBaron's younger brother, Eric, was kidnapped in May and returned unharmed a week later. The incident prompted Banjamin LeBaron to become a nationally recognized anti-crime activist who moved the local community to take a stand.