MEXICO CITY, Mexico (CNN) -- A legislative candidate was killed, along with his wife and two children, bringing campaigns for statewide offices in the southeastern state of Tabasco to a halt, the state-run news agency Notimex reported. 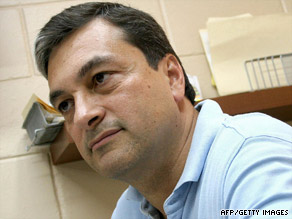 PRI candidate Jose Francisco Fuentes Esperon was killed, along with his wife and their two sons.

The bodies of Jose Francisco Fuentes Esperon, his wife and two young sons were found inside their home in the capital of Villahermosa on Saturday.

According to local reports, Fuentes' wife was shot in the head, and the boys, ages 10 and 13, had been asphyxiated. Less clear was the candidate's fate. Some reports said that his body had signs of torture and had a wound on his neck, which may have been from a gunshot.

As of Sunday, authorities had not released a motive for the crime, though speculation of a drug cartel hit or a robbery circulated in Tabasco.

Fuentes' party, the Institutional Revolutionary Party, or PRI, immediately announced a campaign moratorium for all of its candidates for the state's October 18 elections. Other political parties followed suit.

"The PRI cannot go out at this moment and ask citizens for their vote when it finds itself with a broken heart because of the homicide of its candidate," Tabasco PRI director Adrian Hernandez Balboa said, according to Notimex.

In response, the Tabasco state government offered all political candidates protection during their campaigns if they requested it, a statement from the office of Gov. Andres Granier Melo said.

Mexican President Felipe Calderon called Granier to offer his condolences and show his support for the investigation, the statement said.

The weekend slaying was not the first time an entire family has been killed in Tabasco.

In February, a Tabasco police official who had arrested a drug trafficker a week earlier was killed together with his mother, wife, children and nieces and nephews. His brother, also a state police officer, was wounded, as were two others.

The day before Fuentes and his family were killed, unknown gunmen fatally shot two state police officers in Villahermosa and injured two others.

All About Mexico • Institutional Revolutionary Party