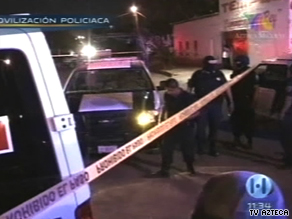 Police gather at the rehab facility where 17 people were killed in Ciudad Juarez, Mexico, late Wednesday.

"At the very least, it was one organized crime group thinking that another group was operating in that place," Reyes told CNN.

Wednesday night's shootings, he said, are similar to an attack at a drug facility in March that left 20 patients dead.

A Mexican civic group said last week that Ciudad Juarez, across the border from El Paso, Texas, had the most slayings per capita in 2008 of any city in the world.

The latest Juarez killings came on the same day that gunmen shot dead the No. 2 security official and three others in Michoacan, the home state of Mexican President Felipe Calderon.

Jose Manuel Revuelta Lopez, the deputy public safety secretary of Mexico's Michoacan state, was killed in a shootout that also claimed the lives of two of his bodyguards and a bystander caught in the crossfire, said Jesus Humberto Adame Ortiz, spokesman for the state.

Revuelta was leaving his office at 5:15 p.m. in the state capital, Morelia, when the shooting occurred, Adame said.

An unprecedented wave of violence has washed over Mexico since Calderon declared war on drug cartels shortly after coming into office in December 2006. More than 11,000 people have since died, about 1,000 of them police.

The offensive against the government has been especially fierce in Michoacan.

In July, La Familia Michoacana drug cartel was accused of assaults in a half-dozen cities across the state and of torturing and killing 12 off-duty federal agents and dumping their bodies on a remote road. That violence was thought to have been retaliation for the arrest of a La Familia leader.

In Juarez, much of the violence is being committed by the rival Sinaloa and Juarez drug cartels, which are fighting for lucrative routes into the United States as well as local street sales, Reyes said.

The deportations of thousands of Mexicans who have served time in U.S. jails into Ciudad Juarez are adding a deadly ingredient to an already volatile state of security, he said.

In the past 45 days, 10 percent of those killed in Juarez had been deported from the United States in the past two years, Reyes said.

"We don't have the statistics to know if they were criminals from the United States or not," he told CNN. "We know they were deported from the U.S. Most of them come from U.S. jails. They end up in the city of Juarez, and that's a problem generated for us, but also for the United States."

Most deportees are simply Mexicans who crossed the border illegally, but some hardened criminals get involved with the gangs, which have networks in the United States, Reyes said.

According to a report released last week by the Mexican Citizens Council for Public Security watchdog group, Juarez had an estimated rate of 130 killings per 100,000 people. The city has a population of around 1.5 million.

By comparison, the homicide rate in New Orleans, Louisiana, the deadliest city in the United States in 2008, was 64 homicides per 100,000 residents, based on preliminary FBI figures.

CNN's Arthur Brice and Mariano Castillo contributed to this report.

All About Mexico • Ciudad Juarez • Felipe Calderon • Murder and Homicide