(CNN) -- The mayor of Ciudad Juarez, Mexico, is asking Mexican federal authorities not to pull military units out of the region for at least another six months. 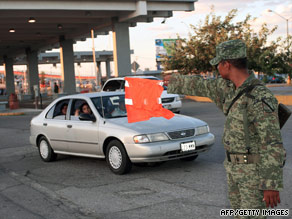 A Mexican soldier controls traffic at the Mexico-U.S. border customs post in Ciudad Juarez on August 16.

A decision on whether to withdraw the troops is expected before September 15. The troops were sent to the city across from El Paso, Texas, in the spring of 2008 to help quell violence involving warring drug cartels. An additional surge of troops was sent this spring.

That surge appeared to work at first, cutting the homicide rate in Juarez drastically. But murders in the city spiked over the summer.

Figures provided by the city show that in August. more than 300 people were killed, the deadliest month so far this year. In July, 260 died and in June, 220. Those numbers were in stark contrast to 16 homicides in March, 42 in April and 60 in May.

The mayor, Jose Reyes Ferriz, attributed the summer spike in violence to wars between cartels over the control of street drug-sale points. The cartels are hiring mostly youths to handle retail drug sales, he said, and that has resulted in most of the murder victims being between the ages of 14 and 25.

The mayor said Juarez is not ready for the army's full withdrawal, even though he is aware the troops' presence was meant to be a temporary solution to give the city time to get rid of corrupt police officers, hire new ones and train its new force.

"We have accomplished the part that has to do with strengthening the police, but the city is in a very difficult situation. We are asking part of the army to stay and help us," Reyes Ferriz said.

In September, 750 newly graduated police cadets are expected to join Ciudad Juarez Police Department, and another 400 in October, bringing the force to a total of about 3,000 officers.

The operation's spokesman, Enrique Torres, said the military is "evaluating the security situation" in the city and will be "implementing a gradual withdrawal."

All About Ciudad Juarez • Mexico