(CNN) -- Ciudad Juarez, Mexico, may be one of the world's most dangerous cities, but an influx of new police officers will stem the wave of violence set to make August the deadliest month yet, Juarez Mayor Jose Reyes Ferriz told CNN Monday. 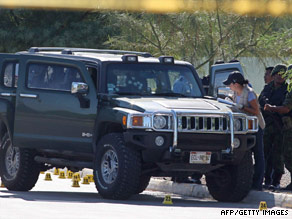 Police check the vehicle where an unidentified man was killed in Ciudad Juarez on Thursday.

Drug-related violence in the border city across from El Paso, Texas, is exceeding July's record of 260 killings. Reyes Ferriz put August deaths at 290, but others place it above 300.

In September, some 750 new officers will be added to the police force, followed by another 400 in October, Reyes Ferriz said. The additional manpower will begin to reverse the city's bloody trend, the mayor said.

Killings in Juarez began to spike in early 2008, when the Sinaloa drug cartel began a turf war with the Juarez cartel.

Stories of shootouts in the streets -- many in daylight and fought with high-caliber assault weapons -- damaged the city's image and threatened its economy.

The fight against the drug cartels in Juarez has required new depths of interaction between the military and the local government, and "at the end of the day, I think things are moving ahead very well," Reyes Ferriz said.

The new police officers will replace more than 700 municipal police officers who left the force last year. The majority were fired after some failed a new "confidence test," and others either quit or took early retirement when the test was announced.

Corruption has been a big obstacle in fighting organized crime in Mexico. The additional scrutiny is just one way Reyes Ferriz has tried to clean up his city.

Police will soon have new radio equipment that tracks who talks to whom and can record conversations, Reyes Ferriz said.

A surge in military presence in March significantly reduced the violence and gave the mayor time to clean out the police department and find new recruits. About 7,500 soldiers remain in Juarez.

But even with the army, sent by President Felipe Calderon, the respite from the drug violence was short-lived. By May, the killings were back on record pace and have not let up.

"I think that the mayor is more optimistic than most people in the city and most analysts," Tony Payan, a political science professor at the University of Texas at El Paso, told CNN.

Reyes Ferriz has made progress with the police department, but the recruits face the same intimidation as their predecessors at the hands of the violent drug gangs, Payan said.

The training period has also been too short for the mission they will be carrying out, he said.

Juarez officers are now the second-highest paid local cops, behind Tijuana, Reyes Ferriz said. And the new recruits will receive specialty training in addition to high-tech equipment, he said.

While the numbers of killings remain at the highest levels, Reyes Ferriz said that the type of killings have changed.

The turf war between the Juarez and Sinaloa cartel leaders has lost intensity, resulting in a drop of high-powered street shootouts. In its place, street-level dealers for the two gangs, usually young men, have been carrying on the fight, usually in more isolated areas and with smaller guns.

Payan, who studies the drug cartels, said that the uptick in street-dealer killings does not mean that the cartel bosses are done fighting for the territory and its lucrative access to the United States. Ciudad Juarez directly borders El Paso, Texas.

"I've seen no evidence that the larger cartels have actually gone to the negotiating table and settled the territory," he said.

The change the in the way people are dying in Juarez could be because of shifting cartel tactics as much as because of police and military patrols, Payan said.