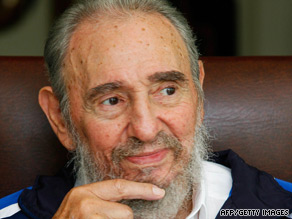 Fidel Castro says taking on the Taliban is a mistake, noting the Taliban "sank the Soviet Union."

Richardson, who was nominated for commerce secretary in the Obama administration but withdrew, is in the Cuban capital this week on a trade mission "designed to capitalize on potential agricultural and cultural partnerships between Cuba and New Mexico," according to the governor's Web site.

Despite the near half-century trade embargo, the U.S. Treasury Department permits U.S. states to sell agricultural, medical and IT products in Cuba on a cash basis, it said.

Richardson, who has already met the former Cuban president -- negotiating the release of three political prisoners in Cuba in 1996 - is known for his diplomatic resume, including high-level talks with North Korea, Sudan, Iraq and others.

The visit comes after the recent release of a new video and photo of Fidel Castro, revealing an apparently healthier-looking man than in previous images.

It was the first video of Castro broadcast in 14 months.

The Cuban leader ceded the presidency to his younger brother, Raul, but has retained leadership of the Communist Party, the only legal political party in Cuba.

Earlier this month, Cuban President Raul Castro said in a speech to parliament that Havana is ready and willing to start a dialogue with Washington, but warned that political and regime change are not up for negotiation.

All About Fidel Castro • Cuba