BUENOS AIRES, Argentina (CNN) -- Argentina's Court of Justice on Wednesday convicted and sentenced a club owner to 20 years in prison for a deadly club fire that killed 194 people but absolved the band that had played that night of responsibility for the tragedy. 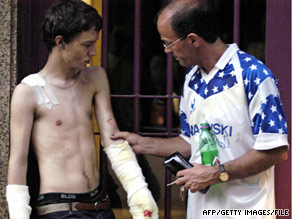 An injured clubgoer and his father wait for news of his brother after the club fire in December 2004.

The incident happened in December 2004, when a fire broke out in the overcrowded Republica Cromanon venue in Buenos Aires. Many of the exits to the building were illegally closed.

Omar Chaban, the owner of Cromanon, was convicted of causing the deaths of the concertgoers and of bribing officials, the court said. Prosecutors had asked for 23 years for Chaban, who became the object of such scorn that he had to move repeatedly over the past four years to avoid harassment, according to the newspaper Clarin.

Some city officials also were convicted in the case. Deputy commissioner Carlos Diaz was sentenced to 18 years, and two other city functionaries were sentenced to two years for failing to carry out their municipal duties.

But the members of the Callejeros band, whose fans were gathered outside of the court house, were acquitted although band members had been indicted.

Family members of the victims reacted strongly when the judge announced that the band was not found responsible.

Victims' family and friends inside the courtroom began crying and shouting at the news, and at least one man was removed by police.

Outside of the courtroom, there were some injuries as fans of the band and families of the victims clashed.

"The justice we were hoping for does not exist," Betty Morales, a family member of one of the victims, told CNN en Español. "Callejeros are just as responsible... While they are partying, our children are buried, dead."

All of those convicted Wednesday remained free pending appeals.

The Republica Cromanon nightclub was made to hold about 1,000 people, but it was estimated that more than 3,000 fans were packed inside the night of the fire, which began when fans began lighting flares that caught the roof on fire.

The members of the band began playing together in 1995 and took the Callejeros name in 1997, according to a fan site.

The band was considered an up-and-coming rock group, but didn't perform for almost two years after the deadly fire. And when they did play, it was a controversial event.

Fans of the band rejoiced at Wednesday's outcome.

"Personally, I think it's good because the band didn't have anything to do with it," fan Mauro Fernandez told CNN.