(CNN) -- Forget Disneyland! Costa Rica is the happiest place in the world, according to an independent research group in Britain with the goal of building a new economy, "centered on people and the environment." 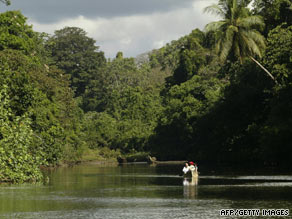 Costa Rica is known for its lush rain forests and pristine beaches.

In a report released Saturday, the group ranks nations using the "Happy Planet Index," which seeks countries with the most content people.

In addition to happiness, the index by the New Economics Foundation considers the ecological footprint and life expectancy of countries.

"Costa Ricans report the highest life satisfaction in the world and have the second-highest average life expectancy of the new world (second to Canada)," the organization said in a statement.

They "also have an ecological footprint that means that the country only narrowly fails to achieve the goal of ... consuming its fair share of the Earth's natural resources."

This year's survey, which looked at 143 countries, featured Latin American nations in nine of the Top 10 spots.

The runner-up was the Dominican Republic, followed by Jamaica, Guatemala and Vietnam.

Most developed nations lagged in the study.

While Britain ranked 74th, the United States snagged the 114th spot, because of its hefty consumption and massive ecological footprint.

The United States was greener and happier 20 years ago than it is today, the report said.

Other populous nations, such as China and India, had a lower index brought on by their vigorous pursuit of growth-based models, the survey suggested.

"As the world faces the triple crunch of deep financial crisis, accelerating climate change and the looming peak in oil production, we desperately need a new compass to guide us," said Nic Marks, founder of the foundation's center for well-being.

Marks urged nations to make a collective global change before "our high-consuming lifestyles plunge us into the chaos of irreversible climate change."

The report, which was first conducted in 2006, covers 99 percent of the world population, the statement said.

All About Costa Rica