(CNN) -- The first bodies to be recovered from the crash of Air France 447 arrived at a Brazilian Air Force base in Recife, Brazil, Wednesday, the air force announced. 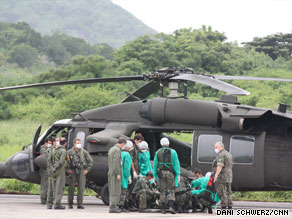 Brazilian pilots and a medical team bring one of the first bodies ashore at Fernando de Noronha island.

The 16 bodies were taken to the Legal Medical Institute in Recife for identification, the statement said. Police will perform DNA tests at their lab in the capital, Brasilia, if necessary, they said.

Another 25 bodies have been found and will go through the same procedure starting Thursday, the air force said. Official identification of the bodies will be made only by the Legal Medicine Institute, even if any of the bodies could have been identified while on Fernando de Noronha, the islands where they were first brought after being recovered.

A French nuclear submarine joined the hunt Wednesday for the flight data recorders and other wreckage from Air France Flight 447 as Brazilian air force and navy crews continued to pull bodies from the Atlantic. Bad weather and poor visibility are expected in the search area, Brazilian Air Force spokesmen said.

France is leading the investigation into what caused last week's accident when the Paris-bound flight from Rio de Janeiro plunged into the sea off the Brazilian coast with 228 passengers and crew on board.

Around 400 French military personnel are involved in the salvage effort. France has also sent two tugs towing 40 tons of recovery equipment, a surveillance ship and a ship equipped for amphibious operations.

Fourteen aircraft -- 12 Brazilian and two French -- are participating, along with five Brazilian ships. The U.S. Navy will contribute two high-tech acoustic devices to listen underwater for the emergency beacons that are attached to the voice and data recorders.

The "towed pinger locators," which help search for emergency beacons on downed aircraft to a maximum depth of 6,000 meters (20,000 feet) -- will be placed aboard the French tugs.

Brazilian officials emphasized earlier this week that finding bodies was their main priority. The French are in charge of finding the voice and data recorders.

The 16 bodies retrieved Tuesday from the Atlantic were taken to the island of Fernando de Noronha for transport by helicopter to Recife. The 25 bodies previously found were put aboard a Brazilian frigate.

Watch bodies being returned to land »

The first bodies were recovered about 320 kilometers (200 miles) northwest of the Brazilian archipelago of Saint Peter and Saint Paul; Tuesday's recoveries were 80 kilometers (50 miles) away.

It was not clear whether the bodies had drifted in the 1-2 knot currents or whether their separation suggested that the jet may have broken apart in the air.

The location of the crash has not been determined, because ocean currents have moved the bodies and debris. The search area covers 200,000 square km (77,220 square miles), Brazilian officials said.

The ocean depth where the debris and bodies have been found varies, but averages about 3,000 meters (nearly 9,900 feet) deep, according to the University of New Hampshire/National Oceanic and Atmospheric Association Joint Hydrographic Center.

Brazilian officials said the plane debris will be taken to France for investigation but the bodies would undergo forensic tests in Recife.

The cause of the crash is still not known, but investigators are looking at the possible role of airspeed sensors known as Pitot tubes, among other factors.

Did plane's tail fin snap off? »

Air France has agreed to replace the sensors on its Airbus A330 and A340 jets, a pilots' union said Tuesday.

The airline said Saturday that it began replacing its fleet's sensors last month.

The biggest union, SNPL, said Tuesday it has accepted Air France's assurances that no Airbus A330 or A340 will take off unless at least two of its three Pitot tubes have been replaced.

Union spokesman Eric Derivry added that there is no indication that the Pitot tubes caused the accident.

Air France said over the weekend that it began to notice in May of last year that Pitot tubes sometimes briefly iced up at high altitude on A330s and A340s. That caused "a loss of airspeed data," according to the airline -- that is, the pilots didn't know the plane's speed.

Air France decided to replace all its probes starting April 27, following laboratory tests earlier in the year, the airline said.