MEXICO CITY, Mexico (CNN) -- The Mexican navy said Wednesday that it rescued five Ecuadorians who had been adrift without supplies in a fishing boat for more than two weeks off the coast of the southern state of Chiapas. 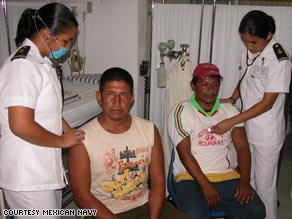 Mexican authorities initiated the rescue, which occurred Tuesday, after the U.S. Coast Guard alerted them that sailors aboard a fishing boat located 45 nautical miles (83 km) southeast of Port Chiapas had signaled to a passing plane that they needed help.

The Mexican navy dispatched a helicopter, which located the 15-meter-long (49-foot-long) vessel and carried out the rescue by air, the navy said in a news release.

The sailors were taken to the Naval Sanatorium of Puerto Chiapas, where doctors determined they were dehydrated.

They said they had departed Costa Rica's on May 6 but, five days later, their motor stopped working and, unable to repair it, they had been adrift and without food since.

A naval patrol boat towed the boat to Puerto Chiapas, arriving there Wednesday morning. It will be inspected to rule out the possibility that it may have been used for illicit activities, the navy said.

All About Mexico • Ecuador