(CNN) -- Guatemalan President Alvaro Colom has dismissed an allegation that he was behind the death of a lawyer who left a video blaming the president if anything happened to him. 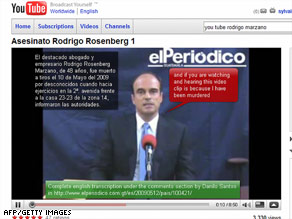 A video with Rodrigo Rosenberg appears on YouTube in which he accuses Guatemala's leader in his death.

The lawyer, Rodrigo Rosenberg, was shot and killed Sunday while riding a bicycle in Guatemala City.

On Monday, a video surfaced in which Rosenberg -- seated behind a desk and calmly speaking into a microphone -- linked Colom and an aide to his death.

"If you are watching this message," Rosenberg said on the video, "it is because I was assassinated by President Alvaro Colom, with help from Gustavo Alejos," the president's private secretary. Rosenberg mentions a third person who he believes would have been involved in his death and also mentions those three people as well as the president's wife in connection with two killings last month.

In a broadcast to the nation Monday night, Colom denied any connection.

"We categorically reject the accusations that pretend to tie the president, first lady and private secretary as those responsible for this assassination," Colom said.

A dated and signed transcript of the video's content indicates Rosenberg made the recording last week. It surfaced Monday after his funeral, and was posted on YouTube and distributed to other media outlets by the newspaper El Periodico de Guatemala.

Rosenberg's video said he was targeted for talking about the death of prominent businessman Khalil Musa and his daughter in April.

They were killed, Rosenberg said, because they had refused to participate in acts of corruption as the president wanted.

Rosenberg said he had been speaking out about his belief that Colom and others were behind the slaying.

Carlos Castresana Fernandez, the head of a U.N.-Guatemalan commission set up to investigate corruption and political violence, told CNN that his agency will support an investigation by the country's attorney general.

Castresana's organization, the International Commission Against Impunity in Guatemala, was set up because of an "almost complete failure" of the country's legal system following a decades-long civil war that ended in 1996. He said the facts were "serious enough" that his organization was assisting prosecutors to mount a transparent investigation.

In the video, Rosenberg wears a blue-gray suit, white shirt and solid sky-blue tie. A blue cloth backdrop drapes the wall behind him and a large red broadcast-type microphone sits on the table in front of him.

He speaks in a calm, deliberate voice and mentions that he is the 47-year-old father of "four divine children, with the best brother that you could ask of life, with incredible friends and very much wanting to live in his country." But he adds that he could not have lived with himself if he had not come forth with the accusations.

Mario Gonzalez, manager of the business Musa owned, told CNN en Español that Rosenberg relayed to him Friday afternoon his plan to release the information to the media. Rosenberg knew he was targeted, Gonzalez said.

"He felt threatened," Gonzalez said. "[But] he was not afraid. He had been threatened but he knew that sooner or later he would be killed. 'They are going to kill me,' he said."

The lawyer's niece, Mariela Rosenberg, said her uncle learned to accept his fate.

"He had many threats," she told CNN en Español, "and when he saw it was inevitable, he taped a video."

In addition to Colom's broadcast address, the government posted a seven-point statement on its Web site rejecting the assertions and saying the claims were meant to create "political chaos."

In the posting, Colom's administration blamed Rosenberg's death on organized crime and welcomed international assistance in the investigation.

"The government of Guatemala categorically condemns the hostile, malicious way some sections of the population are using these events in order to create political instability in the country," it said.

"The murder of lawyer Rosenberg as well as the recording and written declaration distributed have to be analyzed very carefully," the government said, "because the murder as well as the accusations are very serious offenses that are severely punishable by the law and are attempts against the state of law and democracy."

Some analysts say they have no knowledge of Colom or others in his inner circle being involved in the killings, but point to Guatemala's history of corruption and large-scale involvement in the drug trade.

"Guatemala has been particularly known for the complicity of the government with the dark forces of the nation," said Larry Birns, director of the Council on Hemispheric Affairs, a Washington policy institute.

In his video, Rosenberg bemoans the "narcos, assassins and thieves" who have taken over the country.

"Those thieves are sinking all of Guatemala," he said. "They kill people like dogs."

About 200,000 people have been killed in Guatemala since 1970, mostly as a result of organized crime and drug-trade violence, Birns said.

The violence has gotten worse, he said, since Mexican President Felipe Calderon started waging war on that nation's drug cartels a couple of years ago. Mexico shares a 541-mile (871-kilometer) border with Guatemala and many Mexican narcotraffickers moved their operations to the neighboring country.

Guatemala is also known for money-laundering.

Peter Hakim, president of the Washington-based Inter-American Dialogue think tank, said Guatemala has a reputation for corruption and the drug trade.

"It is a country where one of two presidents ends up being seriously charged with corruption," he said.

"Guatemala has the lowest tax collection, the lowest government expenditures of any country in Latin America," Hakim said.

Colom was elected in November 2007 on a promise to lessen Guatemala's horrendous poverty. It hasn't worked out that way.

"He proved to be a disappointment," Birns said.

All About Guatemala • Alvaro Colom