By Karl Penhaul
Special to CNN

Editor's note: Journalist Karl Penhaul spent several weeks tracking the gangs of the Mexican underworld, the corrupt officials who support them and the cops trying to halt the violence. This is the second of three exclusive reports. Part one looked at the violent rules gangs live by. 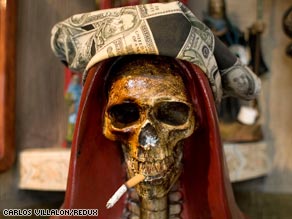 The faithful leave this "Holy Death" statue offerings including cigarettes and cocaine, visible in the nose.

CULIACAN, Mexico (CNN) -- A baseball cap dangles from a cement cross. The slogan on the hat reads "power, money, respect." On the brim there's the logo of the classic gangster movie "Scarface."

"Lupito," as friends and family knew him, went down in a hail of bullets before he reached 22. Authorities said he died alongside three others in a gunfight with a rival drug gang high in the Sierra Madre mountain range that is the backbone of Mexico's Pacific coast state of Sinaloa.

A printed banner draped over his tomb offers a deeper insight. It shows a photo of him alongside a marijuana plantation and an AK-47 assault rifle fitted with a 100-round ammunition drum.

The drab grave of this cartel triggerman, at the Jardines de Humaya cemetery in state capital Culiacan, stands in stark contrast to the mausoleums of dead capos, or drug bosses. Those are elaborate two- and three-story constructions, some perhaps 25 feet high, made of bullet-proof glass, Italian marble and spiral iron staircases.

A bricklayer at work in the cemetery told me the fanciest cost between $75,000 and $150,000. He said grateful drug barons often pay for loyal hitmen to be buried here, the city's toniest graveyard. Like so many other people we've met over the last few weeks, he declined to give his name or speak on camera.

Days later I track down Lupito's cousin, Giovanni Garcia, on the phone. He's an undertaker and by coincidence he took the call that Lupito had been shot.

"My cousin loved that way of life," Garcia said briefly before turning down a recorded interview. "We can't talk. You must understand how things are around here these days. It's not a good time."

That Sunday, I linger at Lupito's graveside. Three young men show up. They look about the same age as the dead gunman, the same cropped-hair, one heavily scarred around his eye.

In the breeze they struggle to light a dozen foot-high candles. I introduce myself. A few grunts later and I can see this conversation is going nowhere fast.

"We couldn't make it to the burial. This is the first time we've come to pay our respects," one of them explained. He never offered his name.

Drug rivalries have been known to spill over at funerals so many mourners opt to stay away leaving only the closest relatives to bury their dead quietly and without public complaints.

I stick around hoping to meet more talkative mourners. My wait is cut short. A fourth man appears between the tombstones some 20 yards away, apparently having seen me. As he talks into a phone I hear him say: "Hey, take your chance. Go grab f**king baldy."

I look around. No other bald men in sight -- just me. Time to leave.

At Jardines de Humaya and across town at the 21 de Marzo cemetery, rows of recently dug graves are filled with the young foot soldiers of Mexico's drug war.

A crosscheck of their names in the obituary columns of the local newspaper reveal tales of men in their late teens and early 20s, gunned down in firefights, shot in cold blood on their doorsteps or killed in prison clashes.

Jesus Gaston earns around $40 for every three graves he digs. But he can see the lure of easy money in the drug trade is little more than a mirage.

"The easy money lasts for just a few days because it's all about time before they kill you too. You kill somebody and somebody will come back for you," he said. "Some how, some way they will find you."

When the reality boils down to kill or be killed, it's unsurprising the hitmen and the narco-traffickers want to improve their odds of survival.

Most days, you can hear a brass band or a cowboy trio thumping out tunes in a small building on a Culiacan side street. It's a shrine to a highway robber called Jesus Malverde. In the century since he died he's become known as the patron saint of the drug trade.

Men in cowboy hats and ostrich-skin boots duck in and out of view. Some try to conceal their faces behind a musician's trombone or tuba.

The day I dropped in, one man was paying around $600 for a band to play for three hours. Off camera he told me it was his way of repaying a favor to Malverde. I asked him about that favor and he said he was celebrating a bumper harvest -- of beans and corn.

He said he was shy about appearing on camera.

I told another man, who gave his name as "Rosario," that he looked like a stereotypical narco. He had the ostrich-skin cowboy boots and shaved head. Besides that he seemed to be spending a small fortune, by Mexican standards, on live music, foot-high candles and fresh flowers to place at Malverde's altar.

Rosario laughed off my suggestion and laughed again in my face as he told me he was paying tribute to Malverde after a good few months working as a carpet fitter in Arizona.

It was refreshing to find a straight-talking trombone player at the shrine, Jaime Laveaga. He makes his living playing music and he's clear about who his main clients are.

"It sounds bad to say it but Culiacan is a city with a big drug mafia. They like brass band music and they love to celebrate -- 15th birthdays, weddings, family birthdays. They even celebrate their dogs' birthdays," he explained.

Needless to say, the Catholic Church takes a dim view of those who worship Malverde and another growing cult known as the "Holy Death," which critics say is also popular among thieves and narcos.

"People are looking for easy solutions where they don't have to make any sacrifices. If they don't find any support for their killings or their drug trafficking from the Catholic Church then they look for other options," Father Esteban Robles, spokesman for the Culiacan diocese told me. "They're looking for something that will justify their actions."

Tomorrow, Penhaul examines how the gangs dispose of their victims and what officials are doing to stem the violence.