By Kathleen Kennedy Townsend and Paul Helmke
Special to CNN

Editor's note: Kathleen Kennedy Townsend, the former lieutenant governor of Maryland and daughter of late U.S. Sen. Robert F. Kennedy, is a former U.S. deputy assistant attorney general and serves on the board of the Brady Campaign to Prevent Gun Violence. She is a Democrat. Paul Helmke, the former mayor of Fort Wayne, Indiana, is a Republican and president of the Brady Campaign. 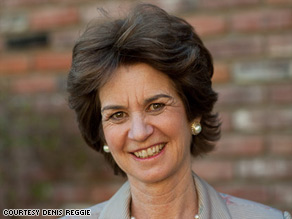 (CNN) -- America's neighbor to the south is engaged in a bloody war with ruthless drug cartels.

It is a war that is threatening to bring down the government of Mexico, is spilling over into neighborhoods in the United States and is fast becoming a serious national security concern.

American gun sellers supply the cartels with 95 to 100 percent of their guns, according to the U.S. Bureau of Alcohol, Tobacco, Firearms and Explosives.

While the Mexican drug war has the media and Washington abuzz, there has been little mention of our role in supplying the terrorists: We need to realize that the Mexican drug cartels are arming themselves here because our gun laws have loopholes so large that criminals and gun traffickers can easily drive gun-laden trucks through them. Mexican Attorney General Eduardo Medina Mora correctly called American gun laws "absurd."

We need to prevent Mexican criminals and the traffickers who supply them from buying guns by changing our gun laws and strengthening U.S. law enforcement's ability to crack down on corrupt gun dealers.

Anderson Cooper reports live from the Mexican border as brutal drug trade violence spills over into the United States.
Tonight, 10 ET on CNN

Proposals from Washington have ignored these central points, instead focusing on border issues, enforcement of current laws and a possible federal ban on assault weapons. Though helpful, those proposals do not address some other fundamental weaknesses of our gun laws.

If we want to help the Mexican people and our own, we must eliminate the loopholes and gaps in federal law that allow guns to be sold without Brady background checks by unlicensed sellers. The ATF has found that gun sales without background checks are a major source for supplying dangerous people with guns.

At gun shows -- sort of like flea markets for firearms -- so-called private sellers sell guns to anyone, no questions asked, except in states that have closed this loophole under state law.

Texas and Arizona continue to allow private sellers to sell without background checks, and gun shows in those states are one of the sources of guns recovered in Mexico.

Mexican drug cartels are exploiting this loophole. We all agree that criminals should not be allowed to buy guns. We should also agree that all gun sellers should check to make sure they are not arming criminals.

There is more we should do. We must get rid of the riders, known collectively as the Tiahrt Amendment, attached annually to Justice Department appropriations legislation since 2004.

We also should further strengthen the ATF by making it easier to revoke the licenses of reckless dealers, give it the power to suspend licenses and levy civil penalties, and eliminate the bizarre restriction that limits the ATF to only one spot inspection of a gun dealer per year.

In addition to strengthening the ATF's enforcement power, we need to attack gun trafficking at its source by limiting the high-volume gun sales that fuel trafficking from licensed dealers. Under federal law, there is no limit to how many handguns or assault weapons a purchaser can buy at a time, allowing gun traffickers to quickly amass guns suitable for an army.

Every year, 30,000 Americans are killed with guns, but all too often, Washington has ignored the pleas of the vast majority of Americans calling for sanity in our gun laws. Politicians frequently echo the gun lobby refrain to only "enforce the laws on the books," refusing to admit that there are very few laws on the books. But the Mexican drug war has upped the ante.

Now that our weak gun laws threaten the stability of an important ally, fueling one of our nation's most ominous global security threats, the question is whether we will strengthen our gun laws to protect Mexicans, and Americans, or whether we will cater to the extremist gun lobby.

The opinions expressed in this commentary are solely those of Kathleen Kennedy Townsend and Paul Helmke.

All About Mexico • Gun Control • Bureau of Alcohol, Tobacco, Firearms and Explosives