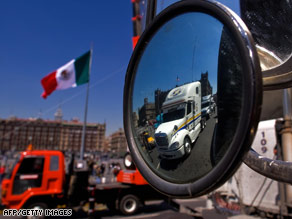 Mexico's state-run news agency says tariffs are in retaliation for cancellation of a U.S. trucking project.

The new trade measures are in retaliation for the cancellation earlier this year of a U.S. commercial trucking project and will target U.S. industrial and agricultural products delivered to Mexico, Mexico's state-run news agency said.

White House spokesman Robert Gibbs said the trucking project was killed in the 2009 omnibus appropriations bill, but President Barack Obama has asked his administration to create a new program.

"Congress has opposed the project in the past because of concerns about the process that led to the program's establishment and its operation," Gibbs said.

The project allowed a small number of Mexican trucks to enter the United States beyond the normal commercial zones, and allowed some U.S. trucks the same privilege in Mexico.

"Unfortunately, this is a predictable reaction by the Mexican government to a policy that now puts the United States in clear violation of the North American Free Trade Agreement and was inappropriately inserted into the omnibus appropriations bill," McCain said after learning of the Mexican government's plans.

McCain said Washington "must take steps to prevent escalation of further protectionist measures -- actions that only serve to harm American business during these tough economic times when these businesses need a worldwide marketplace to prosper."

"This is another reason why the president should have vetoed the omnibus spending bill," McCain added.

"The right response from Mexico would be to make sure its drivers and trucks are safe enough to use our highways without endangering our drivers," Hoffa said in a statement issued by the union. "The border must stay closed until Mexico holds up its end of the bargain."