(CNN) -- Venezuelan President Hugo Chavez said Wednesday he had ordered the nationalization of at least some of the operations of the U.S.-based food giant Cargill and threatened to do the same with the Caracas-based food maker Polar. 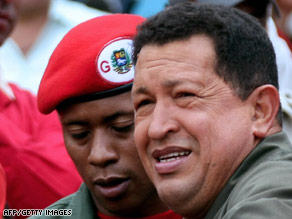 "Begin the expropriation process with Cargill," he said in a nationally televised speech in which he accused the company of growing specialized forms of rice in an attempt to evade price controls.

The leftist president called the company's practices "a flagrant violation of everything that we have been doing."

Mark Klein, a spokesman for Cargill, said the Minneapolis, Minnesota-based company "is committed to the production of food in Venezuela that complies with all laws and regulations."

He said a rice mill cited by Chavez "was designed exclusively to manufacture parboiled rice, which the company has done at this site for the last seven years and elsewhere in the country for 13 years."

Klein added, "Cargill expects the opportunity to clarify the situation with the government and is respectful of the Venezuelan government decision."

Cargill, which is privately owned, has been doing business since 1986 in Venezuela, where its operations include oilseed processing, grain and oilseeds trading, animal feed, salt, and financial and risk management.

It has 2,000 employees in 22 locations in Venezuela, according to its Web site.

About Polar, which is led by Lorenzo Mendoza, Chavez said, "We can expropriate all the plants of Polar. Mr. Mendoza, be alert. Because then you will go out and order your pricey lawyers and I don't know what to say that this is a violation of the constitution. Well, fine. If you want to fight with the government, brother, there you go. It's not with the government, it's with the law!"

In August, Chavez also ordered the nationalization of the Banco de Venezuela "to put it at the service of Venezuela."