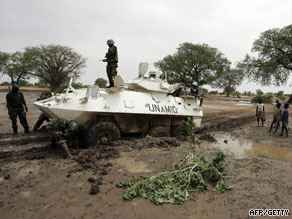 Soldiers with the United Nations Assistance Mission in Darfur (UNAMID) pictured in June.

The man and the woman, whose identities and nationalities were withheld, worked for UNAMID, a U.N. and African Union force designated to keep peace in Darfur.

"Our people have been able to establish contact with the people responsible for the abduction," said UNAMID spokesman Noureddine Mezni, but he declined to identify the abductors.

The organization is "asking for their immediate release," Mezni added.

The peacekeeping force began operations in Darfur in December 2007 and is expected to remain there until July 2010, according to UNAMID's Web site.

As of July 31 its force is comprised of more than 13,000 troops from 39 countries. As of June 30, 999 international civilian personnel were on staff, according to the site.

The United Nations estimates that 300,000 people have been killed in the conflict in Darfur, and 2.5 million have been forced to flee their homes. Sudan denies the death toll is that high.

The violence in Darfur erupted in 2003 after rebels began an uprising against the Sudanese government.

To counter the rebels, Arab militias with ties to the Sudanese government went from village to village in Darfur, killing, torturing and raping residents there, according to the United Nations, Western governments and human rights organizations. The militias targeted civilian members of tribes from which the rebels drew strength.