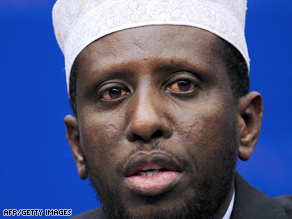 "I am calling on the international community to help Somalia defend against foreign militants who have invaded the country," President Sheikh Sharif Sheikh Ahmed said.

Speaking at a news conference in Somalia's capital city, Mogadishu, Ahmed called several times for international help in fighting foreign militants whom he claims are the same fighters who have fought the "international community" in Iraq and Afghanistan.

"Wherever they come, they fuel violence," the president said. "The Somali people cannot and should not accept that their countries should be a launching pad for these militants to attack."

Ahmed told local journalists that he feared these foreign fighters would turn Somalia into another Iraq or Afghanistan, where U.S.-led forces are fighting Islamic extremist groups.

He also praised local militias in the two regions of Hiiran and Middle Shabelle for struggling against the foreign militias.

Last week, al-Shabab militants advanced to the presidential palace in Mogadishu, sparking sporadic fighting and shelling in the Somali capital. The recent fighting has killed more than 40 civilians and wounded about 150 others, according to sources at the scene.

Al-Shabab -- once the armed wing of the Islamic Courts Union -- has been designated as a terrorist group by the United States, which says it is affiliated with the al Qaeda terrorist network.

Ahmed participated in seizing control of Mogadishu in 2006 along with the Islamic Courts Union before it was ousted by Ethiopian forces later that year.

He has since split from Somali jihad movements and was recently appointed Somalia's transitional president through a process shepherded by the United Nations.

All About Somalia • Ethiopia • Al Qaeda