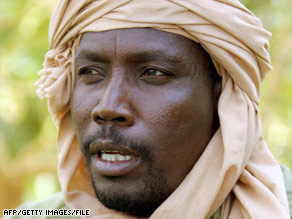 Bahr Idriss Abu Garda spoke only briefly during his short court appearance at The Hague, to thank the court.

Garda surrendered himself to the court voluntarily.

His spokesman said earlier he was not guilty and that he had come to The Hague to show an unwavering commitment to justice.

"We know how innocent he is. After the court, he will be freed. He will return to Darfur to continue his struggle," said Tadjadine Bechirniam, communications director for Garda.

Bechirniam said he could not speak about Garda's defense before the pre-trial hearing.

"There should be no immunity for anyone. We show our commitment to justice, to support justice for people in Darfur and Sudan," Bechirniam said in explaining why Garda is voluntarily appearing before the court. Garda believes in the court's independence, his spokesman said.

Three other suspects, including Sudanese President Omar al-Bashir, also were summoned, but remain at large.

"The voluntary appearance of Abu Garda might serve to encourage other suspects currently at large to come before the court to be heard with all guarantees of a fair trial," said Silvana Arbia, registrar of the international court.

The attack on the African Union peacekeepers came months before the 7,000-strong force was replaced by a joint A.U./U.N. peacekeeping force of 26,000 troops.

The conflict in Darfur began in 2003 after rebels in the western region of Sudan began attacking government positions. Sudan's government responded with a fierce military campaign that has led to some 200,000 deaths and forced 2 million people to flee their homes, according to the United Nations.

All About International Criminal Court • The Hague • Darfur • Sudan