(CNN) -- Algerians went to the polls Thursday in an election that could see President Abdelaziz Bouteflika win a third term in office. 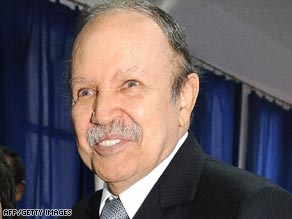 Algerian President Abdelaziz Bouteflika arrives to cast his vote at a school in Algiers.

Bouteflika, 72, is expected to win comfortably as he attempts to reform the country's ailing oil-dependent economy and curb a persistent Islamic insurgency.

However political opponents -- from left-wing parties to Islamists -- claim the election is a charade with fraudulent methods likely to be used to steer Bouteflika to victory.

According to Reuters.com, the five other presidential candidates present no real challenge, and several opposition figures not taking part have urged their supporters either to put blank voting slips in the ballot box or stay at home.

"Abstentions, the one and only adversary of Abdelaziz Bouteflika, could upset all the calculations for the election," Reuters.com quoted Le Soir D'Algerie newspaper as saying.

Algerian lawmakers, most of them loyal to the incumbent president, cleared the way for him to stand for re-election last year by abolishing constitutional term limits. Critics said that would allow him to serve as president-for-life.

Supporters of Bouteflika say he deserves credit for steering the North African country, an oil and gas producer, back to stability after a bloody civil conflict in the 1990s that killed an estimated 150,000 people.

But critics say he is using the threat of renewed violence from Islamic militants to mask the country's deepening economic problems.

"I continue to regard the restoration of civil peace as a national priority, as long as hotbeds of tension and pockets of subversion survive," Bouteflika, running for a third term, said in his final campaign speech on Monday, Reuters.com reported.

He has also promised to spend $150 billion on development projects and create 3 million jobs, his remedy for an economy in which energy accounts for about 96 percent of exports but where other sectors have been choked by red tape and under-investment.

All About Algeria • Abdel-Aziz Bouteflika