(CNN) -- U.S. naval forces hunting pirates off Somalia detained six people this week who appeared to be pursuing a commercial shipping vessel, but soon released them because of a lack of evidence. 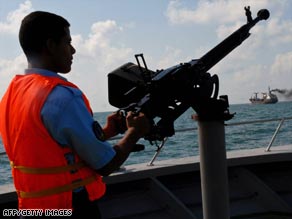 A Yemeni Coast Guard boat patrols the Gulf of Aden for pirates who threaten shipping.

The Navy said on Saturday the six matched the description of suspected pirates aboard a skiff in the area. The naval crew saw the men throwing objects overboard before they picked up the suspects.

Investigators didn't say what was thrown overboard but said the evidence was not sufficient "to hold the suspects for prosecution."

The detentions reflect the aggressive U.S.-led fight against piracy. The United States is spearheading an international naval task force in the waters off Somalia that launched in February after a rash of attacks.

Participating ships are patrolling more than a million square miles of water, an area about four times the size of Texas, Navy officials have said.

The Navy said it arrested the six on Friday after responding to a distress call from the Philippines-flagged MV Bison Express in the Gulf of Aden, between Yemen and Somalia. The ship, a livestock carrier, reported a small skiff containing six heavily armed pirates was pursuing it.

The guided-missile cruiser USS Gettysburg arrived and found a skiff matching the description. A Seahawk helicopter flew from the Gettysburg over the skiff and reported seeing objects being thrown overboard, the Navy said.

A team from the Gettysburg boarded the skiff, along with members of the U.S. Coast Guard Legal Detachment and detained the six suspected pirates. The U.S. officials transferred the suspects onto the amphibious assault ship USS Boxer, the flagship for the international anti-piracy task force, the Navy said, before releasing them.

The attack on the Bison Express was the second one Friday on commercial shipping vessels in the Gulf of Aden, the Navy said. In the first incident, pirates attacked the MV Sea Green, which managed to fend them off by firing flares as the men approached, the Navy said.

All About Pirates • Somalia • Gulf of Aden • U.S. Navy Activities