(CNN) -- Liberia's president has declared a state of emergency after hordes of ravenous caterpillars infested the country. 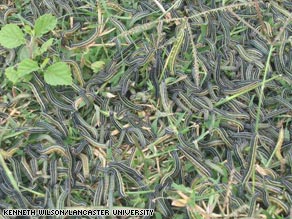 The African armyworm caterpillar is chewing its way through Liberia's food crops.

Tens of millions of the worm-like larvae have appeared in the northern part of the country, where they are destroying green crops like cabbage and collard greens and contaminating the water supply, Liberian Information Minister Laurance Bropleh told CNN Wednesday from the capital of Monrovia.

"I am not aware that they have been here before, ever, and certainly not in this great number," Bropleh told CNN. "That is why it was so overwhelming initially when we first discovered it."

President Ellen Johnson Sirleaf told legislators Monday that 350,000 people in 62 communities in those three counties may have been affected.

There are also indications the bugs have spread to neighboring Guinea, Sierra Leone and Ivory Coast, Bropleh said.

"This is indeed a crisis," the president said Monday. Johnson Sirleaf said she appointed a task force, including members of the U.N. Food and Agriculture Organization (FAO), to identify the species and commence spraying.

Investigators suspect the caterpillars are African armyworms, the FAO said.

The infestation is "quite alarming," said Winfred Hammond, the FAO representative in Liberia.

The pests multiply rapidly and adult moths are able to fly long distances at night, the FAO said.

Worsening the situation, the area's water supply has been contaminated by the huge volume of feces dropped by the caterpillars, the FAO said.

"The plague is being described as Liberia's worst in 30 years," the FAO said. "The last African armyworm outbreak in the sub-region occurred in Ghana in 2006."