LONDON, England (CNN) -- A Russian naval ship rescued a Dutch container vessel under attack by suspected Somali pirates in the Gulf of Aden, the head of the International Maritime Bureau said Wednesday. 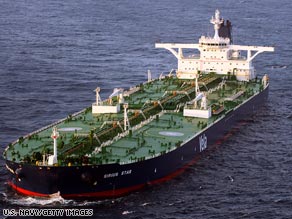 The Liberian-flagged oil tanker Sirius Star was recently released by pirates off Somalia.

Two or three pirate speedboats were chasing the Dutch ship, with the goal of boarding it, when the Russians intervened, said Capt. Pottengal Mukundan, director of the International Maritime Bureau in London.

He said the pirates fired two rocket-propelled grenades at the Dutch ship, but no injuries were reported.

The incident occurred about midday Tuesday.

The Russians chased one of the speedboats but the pirates got away, Mukundan said. He said he did not know where the Dutch ship was headed.

"It is important that the naval vessels continue to respond robustly to these pirates," he said.

Hijackings off the coast of East Africa have become a growing international concern, prompting a number of foreign navies to patrol the Gulf of Aden and neighboring coastal areas.

The Gulf of Aden links the Indian Ocean and the Red Sea. About 20,000 oil tankers, freighters and merchant vessels pass along the crucial shipping route near Somalia each year.

Most of the attacks are blamed on pirates based in largely lawless Somalia, a country racked by poverty and conflict. Watch CNN's exclusive interview with a pirate

According to the United Nations, there were 115 reported pirate attacks off the Somali coast in 2008, including 46 successful hijackings. Read blog on how CNN contacted a pirate

The troubling rise in Somali piracy has led the United Nations to step up efforts to tackle the crime.

He said the group was formed to "establish a counter-piracy coordination mechanism," and the members believe more can be done to halt piracy.

Still, Kimmitt noted that less than one percent of manifests off the Somali coast are attacked by pirates and only 50 percent of those have crew and passengers taken hostage.

The U.N. Security Council adopted a resolution in December expanding counter-piracy measures off the Horn of Africa, including a stipulation that allows national and regional military forces to chase pirates onshore in Somalia when in "hot pursuit."

All About Gulf of Aden • Somalia