(CNN) -- Get out the coats, boots, and shovels; people in some parts of the country are in for it this winter, according to the Farmer's Almanac. 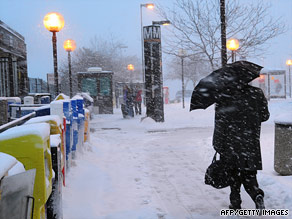 Break out your winter gear -- the Farmers' Almanac is predicting a rough winter for large parts of the U.S.

The longtime periodical, published since 1818 and famous for its long-range weather predictions, is out with its annual winter forecast, which says Old Man Winter is really going to hammer folks in the Midwest and upper Great Lakes region with very cold and very snowy conditions.

The almanac puts it this way:

"A large area of numbingly cold temperatures will predominate from roughly east of the Continental Divide to west of the Appalachians. The coldest temperatures will be over the northern Great Lakes and the Upper Peninsula of Michigan.

"But acting almost like the bread of a sandwich, to this swath of unseasonable cold will be two regions with temperatures that will average closer to normal -- the West Coast and the East Coast."

But don't let your guard down if you live along the East or West coasts.

Farmer's Almanac managing editor Sandi Duncan says no one will be immune to the rough weather this winter.

"Even the areas that we say are going to be like the bread of the ice-cold sandwich are going to have bouts of stormy conditions. There's no way it's going to be that mild of a winter," she says.

Nasty weather is also in the forecast for late in the season as winter moves toward spring.

"We're actually predicting a possible blizzard in the northeast to the mid-Atlantic states sometime in February," Duncan says. "And it does look like the cool temperatures to the cold temperatures are going to hang on. And spring does look kind of rainy."

The Farmers' Almanac gets pretty specific about that late-season blizzard forecast.

According to Duncan, "February 12th-15th looks very stormy with blizzard conditions possible especially in New England but also going down to the mid-Atlantic coast."

The periodical says, "While three-quarters of the country is predicted to see near- or below-average precipitation this winter, that doesn't mean there won't be any winter storms! On the contrary, significant snowfalls are forecast for parts of every zone."