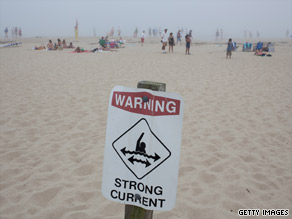 At 11 p.m., the center of the Category 1 storm was about 195 miles southeast of Nantucket, Massachusetts, the National Hurricane Center said. Forecasters said the island can expect 1 to 2 inches of rain, and Outer Cape Cod and Martha's Vineyard may receive only an inch.

"It's been generally calm but tonight we recommend that everybody stay off the beach," he said.

The storm continued its northerly pace of nearly 25 mph. A gradual change to the north-northeast is predicted for Sunday. Bill's sustained winds remained at 100 mph, with higher gusts.

"The surf is definitely big," Emily Chibaro of Nantucket told CNN Radio Saturday. "The south shore part of the island is closed off to all people on the island." iReport.com: Are you bracing for Hurricane Bill?

A gradual weakening is expected Saturday night and Sunday as the hurricane moves north of the Gulf Stream, a swift, warm Atlantic Ocean current.

The core of the storm should pass New England offshore Saturday night, and approach Nova Scotia on Sunday.

A tropical storm warning was issued for the coast of Massachusetts from Woods Hole to Sagamore Beach, including the islands of Martha's Vineyard and Nantucket.

The most intense period of the storm should be between midnight and the predawn hours of Sunday, the governor told reporters in a conference call.

'After the Storm' A Special American Morning Series

Four years after Katrina, what is New Orleans like now? How residents continue to suffer and rebuild.
All next week, 6 a.m., ET.

Patrick cautioned boaters to expect high seas and to avoid the area around Cape Cod. Forecasters have warned of dangerous riptides, or undertows, along the New England coast and points north.

"Waters will be unsafe even for strong swimmers," the governor warned.

Rip currents, or riptides, are strong seaward flows of water that occur where there's a break in the shoreline. They are difficult to detect.

Patrick said advisories will be posted, and beaches on the cape were closed. He urged residents to stay home.

President Obama and his family are scheduled to arrive Sunday for a vacation at Martha's Vineyard.

"We look forward to welcoming him to Massachusetts as soon as he can safely get here," Patrick said.

Watch how Nova Scotians are preparing for Bill »

Total rain accumulations of 3 to 5 inches with isolated amounts of 7 inches are expected near the track of Bill across Nova Scotia, Prince Edward Island and Newfoundland.

All About National Hurricane Center • Bermuda