FARGO, North Dakota (CNN) -- The Red River began to recede Sunday after rising to record levels, but officials cautioned residents not to let their guard down, especially in the face of an approaching snowstorm. 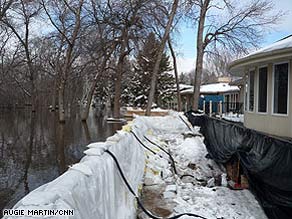 A makeshift levee protects a house Sunday in Moorhead, Minnesota.

"We are very confident now that [the] river is in a slow decline," National Weather Service meteorologist Greg Gust said. "Hopefully, it will be at about 38 feet by next Sunday."

A winter storm warning was issued Sunday for the Red River Valley area between North Dakota and Minnesota, from midday Monday through Tuesday evening. Forecasters expected as many as 10 inches of snow in the area and wind gusts up to 35 mph.

Officials said the wind will cause waves in the floodwaters that will put more pressure on the sandbag dikes along the Red River, but the river levels were expected to continue their gradual decline.

At 7:15 p.m. Sunday, the river at Fargo was at 39.75 feet, lower than its early Saturday peak of 40.82 feet and below the previous record of 40.10 feet set in 1897, according to the weather service. River levels were expected to stay below 41 feet and slowly drop over the next three to seven days, the weather service said.

The river is considered at flood stage in Fargo when it reaches 18 feet.

Water seeped into two of five buildings at the Oak Grove Lutheran School primary and secondary complex after a flood barrier began to leak, officials said. School officials said the two buildings had about 6 inches of water in the basement.

"We knew this flood was going to be different," school spokeswoman Ann Marie Campbell said. "There was a lot of emotion this morning when we got the word we had a breach."

"What happened up in Oak Grove, again, is a wake-up call for the general public," Walaker said. "Those things will continue to happen. I guarantee it."

The University of North Dakota has canceled classes until noon Monday, while the Fargo campus of the North Dakota State University has been shut down until April 6 as the state waits to see whether the worst has passed.

Despite reports the river was dropping, Fargo officials have said they are holding their breath.

"In past flooding, you have to understand, we've had times in which people thought it crested and then it came back and went up," Fargo Deputy Mayor Tim Mahoney said.

"And our temperature is changing, so we will be reluctant to announce a crest until we truly feel there's been a crest," he said. iReport.com: Are you there? Share your photos, video

"We've been under tremendous pressure to evacuate the city," Walaker said. "We're not going to abandon our city. We've invested too much effort into this process." iReport.com: Home's residents cut through deck to build dike

Some residents, however, have evacuated some neighborhoods, hospitals and nursing homes. iReport.com:

A storm with snow was approaching the area, Gust said.

"The snow [is] coming with that winter storm Monday night into Tuesday -- and Fargo could have 6 to 7 inches of snow here, the South Dakota border could see a foot or more -- but that snow should not affect that rate of decline one iota," he said. However, winds associated with the storm could affect the dikes, he said. iReport.com: "It's as if it were a lake, not a river"

Like the Fargo authorities, officials across the river in Minnesota said the revised forecast did not allay their concerns. Residents of Moorhead, Minnesota, warily waited to see if miles of levees and sandbags would hold.

Watch how flooding is affecting Moorhead »

"We're all in this together -- so far, so good," said U.S. Rep. Collin Peterson, D-Minnesota, at a Sunday news conference. "Keep vigilant -- keep checking the dikes."

Evacuations in Moorhead were proceeding smoothly, Mayor Mark Voxland said on Sunday. No breaches of dikes were reported, he said.

Sandbagging operations came to a close in Fargo on Friday, after weary volunteers had filled about 3 million sandbags.

About 1,700 National Guard members were checking dikes in the city of about 90,000 residents. Mahoney said the city -- North Dakota's most populous -- also had prepared "sand balloons," about two tons of sand that could be dropped via helicopter onto any breach.

President Obama said he was monitoring the situation carefully. The president has signed emergency and disaster declarations for Minnesota and North Dakota, freeing up federal funds for the region.

Saturday's flood crest at Fargo set a new level that had held since 1897, when the Red River flooded and reached 40.1 feet at the city.

The Red River approached the 1897 level in 1997, when it reached 39.6 feet, a level that many residents thought would be the highest they'd ever see.

"We thought we were safe, we survived that one, we're good for the rest of our lives. So believe it or not, even though this area is prone to flooding, this is a big shock, this is a big stunner, and it's probably a wake-up call," he said. "Some people might reconsider wanting to stay here."