(CNN) -- The latest prediction for the 2009 Atlantic hurricane season agrees with three previous ones, forecasting a season that will be at least a bit milder than last year's. 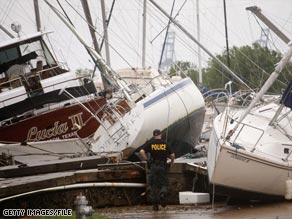 Last year's most destructive hurricane, Ike, tossed boats onto the shore in Bayton, Texas, in September.

AccuWeather is the most recent organization to release its outlook, predicting Wednesday that the season, which runs from June 1 to November 30, will bring 13 named storms and eight hurricanes.

In 2008, there were 16 named storms and eight hurricanes, five of which were major -- that is, classified as Category 3 on the Saffir-Simpson scale of storm intensity -- with winds of 111 mph or higher.

Though they foresee fewer storms than last year, all the forecasts except the one from the Weather Research Center would translate into an above-average season.

According to the National Oceanic and Atmospheric Administration, a "normal" Atlantic season has 11 named storms, six hurricanes and two major hurricanes.

NOAA won't release its predictions until closer to the start of the season. And the forecasts already made are likely to be updated as June draws near.

AccuWeather projected that four of the hurricanes in 2009 will hit the U.S. East Coast or Gulf Coast, and one of those will be a Category 3.

Joe Bastardi, AccuWeather's chief long-range forecaster, wrote on the company's Web site that this year's "storms may be more likely to form in the Atlantic Basin closer to the coast, and the possibility of a major hurricane making landfall in the U.S. cannot be ruled out."

WSI, on its Web site, said its predictions for 2009 stemmed from the expected continuation of "warmer-than-normal Atlantic Ocean temperature anomalies into next summer and fall, and the likelihood of a favorable or neutral wind shear environment associated with the lack of an El Niño event."

El Niño is a fluctuation in the ocean-atmosphere system in the tropical Pacific that can impact global weather.

Last year was considered the fourth busiest Atlantic hurricane year since 1944. The National Climatic Data Center said 2008 was "the only year on record in which a major hurricane existed in every month from July through November in the north Atlantic."

The most destructive was Hurricane Ike, which wiped out neighborhoods in parts of Texas. Even a week later, its remnants were still having an impact on the Great Lakes region.

Two other hurricanes made landfall in the United States last year -- Dolly and Gustav. Neither was a major hurricane at the time it came ashore.

All About Hurricanes and Cyclones • U.S. National Oceanic and Atmospheric Administration