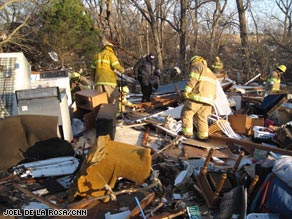 Storms ripped roofs off several homes and left twisted metal and other debris scattered across the area.

Firefighters and emergency personnel were working with distressed residents.

"It was just, like, one after another. As soon as you get calmed down there were more," he said.

The storms had moved out of the state Wednesday morning after at least three tornadoes touched down in central and southern Oklahoma Tuesday, the National Weather Service said Wednesday.

The Enhanced Fujita scale measures the intensity of a tornado and its wind speeds based on the type of damage caused and rates it between EF0 and EF5.

The first tornado, which hit Edmond between 2:30 p.m. and 3 p.m., had an intensity ranging between EF0 and EF2, the NWS said. The service has not been able to determine an intensity for another tornado that hit near Langston about an hour later.

In the aftermath of the storms, authorities acknowledged a heavy task ahead as emergency personnel and private citizens began the cleanup effort. iReport.com: Are you there? Share photos, video

"We're just trying to get stuff in people's hands," store owner Matt Wilson told CNN while handing out pry bars and flashlights to residents at his hardware store in Lone Grove, where heavy damage occurred. "But just about all of Lone Grove is without power."

View a map of where tornadoes touched down »

Lone Grove, near the Texas line about 90 miles south of the capital, Oklahoma City, had all of the fatalities and most of the approximately 50 injuries caused by the storms, according to the Oklahoma Department of Emergency Management.

Also hit hard by the storms were the towns of Pawnee and Edmond, both north of the capital.

Dramatic television footage of one storm showed large funnel clouds that darkened the sky as the storm approached. It mangled homes, snapped trees and crushed cars with debris as it touched down.

"The wind started blowing really hard and then died down," a Lone Grove man told CNN affiliate KOCO-TV. Then, "all heck broke loose. I mean, it just broke loose. The whole house shook."

Donetta Singleton, manager of Bill's Fish House in Lone Grove, said one tornado's path took it right past the restaurant. She said the post office was gone and a church was damaged. Lone Grove police said a trailer park was hit.

About 6,000 OG&E customers are without power, including nearly 3,500 in Lone Grove, according to a statement released by the Oklahoma Department of Emergency Management on Wednesday.

All About Tornadoes • Oklahoma • Edmond (Oklahoma)