Arrest made in death of kidnapped Florida pilot, FBI says 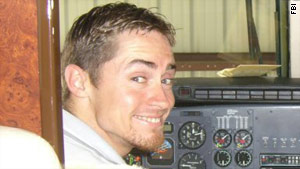 The FBI has not revealed a motive in the death of pilot Robert Wiles.
STORY HIGHLIGHTS

(CNN) -- Missing Florida pilot Robert Wiles, who was believed kidnapped and held for ransom 21 months ago, now is believed to be dead, and a former co-worker is in custody, accused of his death, the FBI said Friday.

Authorities arrested Stobert "Tobie" Holt Jr., 42, Friday in Orlando, Florida, after he arrived from Colombia, where he was on a business trip, according to Tampa-based FBI spokesman David Couvertier.

Holt faces state charges of first degree murder, kidnapping, extortion, and intent to inflict death or serious bodily harm, the spokesman said. The arrest was made by police from Lakeland, Florida, the Polk County Sheriff's Office and the Florida Department of Law Enforcement, who were accompanied by FBI agents, he said.

Though authorities now believe Wiles was killed, they don't know where his body is, he said.

The arrest was uneventful, Couvertier said: "Holt was advised of his rights and said nothing."

The FBI said Holt worked for Wiles at the time he disappeared. He was among several employees who told investigators they last saw Wiles on April 1, 2008, at the office and had no clue what happened to him.

The FBI won't reveal the suspected motive or why agents believe it was Holt who left a uniquely signed ransom note demanding money two days after Wiles disappeared.

At the time, agents said Wiles' father tried to comply with the demand to get back his son, but heard nothing.

Holt is described as an employee who, at least at one time, had a supervisory role at the company.

Wiles was single. When he vanished without a trace, fellow employees said they were stunned.

"All that he ever worked on was customer relations. Making things better for the company," co-worker Jerry Grief said at the time. "Make the customer happy and make them come back."

The FBI said it traveled to six countries and three states tracing Wiles' trips and interviewing business associates. Without disclosing details, agents said the investigation led them back to Holt and his whereabouts the day Wiles disappeared.

Several agencies, including the Florida Department of Law Enforcement and the Polk County Sheriff's Department joined the investigation. The case will be prosecuted by state authorities in Polk County.

They are said to be in seclusion after being notified about Holt's arrest.

When CNN interviewed them last year, Wiles' mother, Pamela, said, "We're willing to work with them and do anything to get him back. We just want Robert back. And they can just go and live their life, and we just want him back."

The FBI will not reveal what makes agents believe Wiles is dead.