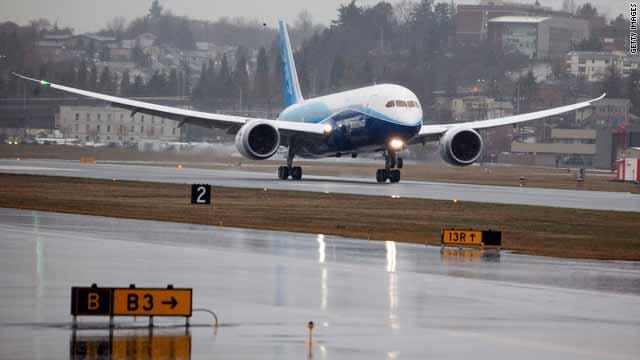 On Tuesday, Boeing made its first test flight of the 787 Dreamliner in Washington state.
STORY HIGHLIGHTS

"It's good is see that plane fly," said Richard Aboulafia, an analyst with the Teal Group in Washington. "With all the delays, you begin to question when things will get on track."

During their time aloft, the chief pilot and captain tested some of the airplane's systems and structures while flight data were transmitted electronically to a team of engineers at Boeing Field.

It will be considered a game changer in 10 years.
--Richard Aboulafia, analyst
RELATED TOPICS

"It will be considered a game changer in 10 years," Aboulafia said of the aircraft that sill must clear a yearlong certification process.

Boeing's fuel claims are linked to its design; it is the first major airliner to be made mostly of composite materials. As a result, it's lighter.

Depending on the configuration, the plane can seat 200 to 300 passengers and can travel more than 2,500 nautical miles, making it an attractive aircraft for point-to-point international travel.

"Everyone wants it. Everyone needs it," said Aboulafia. "It's just a question of how long will it take to get it up to expectations" as the plane goes through the normal ups and downs of rolling out a new aircraft.

The production delays and technical problems have stolen some of the Dreamliner's luster.

Many of the snags in the supply line have been blamed on the army of partners Boeing allied with to help with the construction.

Albaugh acknowledged that, "in hindsight," the level of outsourcing may not have been the best strategy. "There a few things we might have kept inside, yes."

With 10 months of flight tests ahead, the 787s won't start flying commercially until at least 2011, the company said. "There's a lot of work to do," said Albaugh.