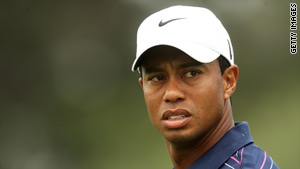 Tiger Woods announced on his Web site Friday that he is taking an "indefinite break" from professional golf.
STORY HIGHLIGHTS

(CNN) -- A major sponsor for Tiger Woods announced Sunday that it is dropping the golf star in light of recent controversy swirling around his personal life.

Accenture, a management consulting firm, said on its Web site that "given the circumstances of the last two weeks ... the company has determined that he is no longer the right representative for its advertising."

The move ends a sponsorship arrangement that lasted six years.

Another major sponsor, Gillette, said Saturday it was "limiting" Woods' role in its marketing programs to give him the privacy to work on family relationships.

Woods announced on his own Web site Friday that he is taking an "indefinite break" from professional golf.

The 33-year-old golfer, who tops the sport's world rankings, has been mired in controversy since he crashed his car outside his Florida mansion late last month. In the week following the crash, Woods apologized for "transgressions" that let his family down, and US Weekly magazine published a report alleging that Woods had an affair with a 24-year-old cocktail waitress named Jaimee Grubbs.

US Weekly's report followed a National Enquirer article before the crash that the athlete was having an affair with a New York nightclub hostess -- an assertion the hostess vigorously denied, according to The New York Post.

The statement Friday on Woods' site was the first time he admitted to infidelity; in a previous statement, he referred to his "transgressions."

The golf phenomenon, who has won three U.S. Open titles and the Masters tournament and the PGA tournament each four times, said in the statement that he will spend his hiatus with his family.

"After much soul searching, I have decided to take an indefinite break from professional golf. I need to focus my attention on being a better husband, father and person," Woods said in his Friday statement.