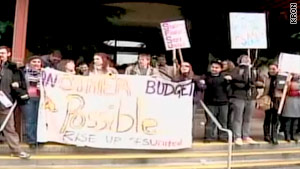 Griffin said the numbers were preliminary and may be updated.

"The facility is now clear of occupants and is being readied for Thursday classes," Griffin said, adding that some protesters had "reconvened" at a city intersection near the campus. She cited reports saying city police have cleared that area and detained people.

The protesters took over the campus building Wednesday morning because of budget cuts in the California State University system and fee increases in the University of California system, which are dual tracks for higher education in the cash-strapped state.

Protesters planned for a long haul, with one of the organizers saying earlier that "we're prepared to be arrested to have our demands met."

"The people inside have food and water sufficient for a couple of days," said environmental studies major Wes Vasquez, one of the protest organizers.

The situation had been calm, Griffin said earlier, except for heated discussions between some counter- protesters and some demonstrators outside the building.

Protesters in the building had issued a list of demands that went beyond the budget. The list on their Web site demanded:

"That the imperialist wars in Iraq, Afghanistan, Pakistan and Gaza are ended, and that money is used to feed and clothe the poor. That the university system be run by the students, faculty and staff. Not administrators. That education, from kindergarten to Ph.D., be free of charge."