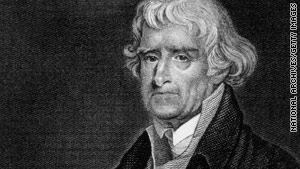 An 1808 letter from Thomas Jefferson turns up during archiving by a University of Delaware graduate student.

(CNN) -- In a nondescript conference room tucked inside the library at the University of Delaware, a graduate student found a historian's equivalent to a needle in a haystack.

Amanda Daddona said she discovered a personal letter from Thomas Jefferson amid one of 200 boxes of legal documents, minutes from meetings and day-to-day correspondence of a prominent Delaware family.

"The first thing I recognized was his signature," said Daddona, 22, who is getting her master's degree in history. "It was really, really exciting. I just sat with it for a few minutes and looked it over and savored the moment."

Daddona found the letter last month in an unmarked folder among archives from the Rockwood Museum in Wilmington, Delaware. The archives, which the library received as a gift this year, contain the keepsakes and papers of the Bringhurst family, early members of Delaware's elite society.

Daddona and fellow grad student Matt Davis have been spending 10 hours a week processing the archives for future use.

The letter, dated February 24, 1808, is addressed to Dr. Joseph Bringhurst, who had informed Jefferson in an earlier correspondence about the death of their mutual friend John Dickinson.

Dickinson, a notable Delaware politician, joined Jefferson in 1775 to write a Declaration of the Causes and Necessity of Taking Up Arms, but opposed separation from Great Britain and abstained from voting on or signing the Declaration of Independence. He was, however, a delegate to the Constitutional Convention of 1787 and a fervid backer of that document after its adoption.

Jefferson's letter is a tribute to Dickinson, whom he calls "among the first of the advocates for the rights of his country." Susan Brynteson, vice provost and director of libraries at the university, said the letter stood out to her because of the "extraordinary humility" Jefferson shows for Dickinson, who was 11 years older than the president.

In it, Jefferson "calls himself a 'junior companion' " of Dickinson's labors, Brynteson said. "It is such a humble letter from a great man."

Daddona said she is still marveling over her big find so early into the archiving process.

"For me, when I find a document, it's very much a personal connection to the person who wrote it or had it," she said. "Just to know that they had written it or had it in their desk -- it's incredible. This letter was like a link to Jefferson himself."

Historians had been aware of the existence of the letter, thanks to Jefferson's use of a portable copying press, one of his many inventions. But its physical whereabouts had been unknown.

The letter will be kept in a vault in the Special Collections Department of the university library.

Brynteson said it will be made available to academics, students and other library visitors.

"To hold it in your hands is really quite thrilling," she said.