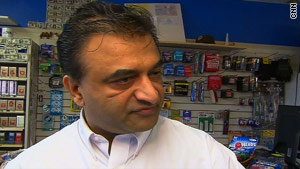 Shopkeeper Mohammad Sohail says he recited an Islamic oath over the would-be robber after he broke into sobs.
STORY HIGHLIGHTS

New York (CNN) -- Six months ago, a Long Island convenience store owner turned a would-be robbery into an act of compassion. On Wednesday, the shoplifter made amends with a $50 bill and a thank you letter for saving him from a life of crime.

The story began in May 2009, when Mohammad Sohail of Shirley, New York, was closing his Shirley Express convenience store one night. Security camera footage from that evening shows a man wielding a baseball bat barging into the store and demanding money.

Sohail had a rifle ready and quickly aimed it directly in the robber's face, forcing the man to drop the bat and lay on the ground. Unbeknownst to the man, Sohail never loads his gun.

According to Sohail, the man immediately started to plead with him, tearfully saying, "I'm sorry, I have no food. I have no money. My whole family is hungry. Don't call the police. Don't shoot me."

"When I see him starting crying [those] things, I really feel bad for him," said Sohail. "I say, oh man, this is something different."

Sohail made the man pledge never to rob anybody ever again, then gave the man $40 and a loaf bread. Sohail, who is from Pakistan, said the man then wanted to be a Muslim like him, so he recited an Islamic oath and gave the would-be robber the name Nawaz Sharif Zardari.

Sohail went to get some milk, but when he returned the man had fled with the money and food.

Both Mohammad Sohail and Suffolk County Police have no idea who the man is. After the May incident, Sohail explained that he will "absolutely not" be pressing charges, though police are still investigating the case.

Over the past six months, Sohail's story of sympathy and kindness has inspired many across the country.

The Shirley Express store has received numerous letters of admiration.

"No person has ever moved my spirit the way you did. From your biggest admirer," one letter says. "Great men are capable of great acts. You are a great American," another reads.

He has also received several checks with such messages for "a couple hundred dollars" in total, says Sohail. He has made a point to give this money "to the people" by offering free bagels, rolls and coffee in his store every night after 9 o'clock.

But the envelope that arrived on Wednesday came as a surprise. Postmarked November 11 without a return address, it enclosed a $50 bill and a note apparently from the would-be robber.

The typed letter begins, "You change My Life (sic)," and goes on to say that the man is sorry for his actions six months ago.

"At the time I had No money No food on my table No Job, and nothing for my family. I know that it was wrong, but I had know (sic) choice. I needed to feed My family. When You had That gun to my head I was 100% that I was going to die," reads the letter.

The letter says Sohail's acts inspired him to become a "True Muslim" and that his life has changed dramatically.

"I'm very happy that somebody got to change his life," Sohail said. "If he is a maybe criminal, maybe is not anymore. So now he is a good person in this community and I'm very glad for that. He's staying out of trouble, he's not in a jail, he's taking care of his family."