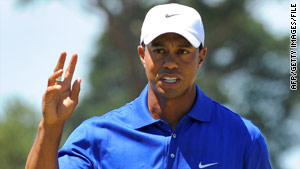 Police have cited Tiger Woods in connection with a Friday wreck near his Florida home.
STORY HIGHLIGHTS
RELATED TOPICS

NEW YORK (CNN) -- A New York nightclub hostess identified by a supermarket tabloid as Tiger Woods' mistress has called allegations that she is romantically involved with the golf superstar false and "ridiculous."

In an interview published Tuesday, Rachel Uchitel told The New York Post that a disgruntled acquaintance sold the story to the National Enquirer and that "not a word of it is true."

"I work in clubs, and I am a businesswoman," Uchitel said. "I do not have sex with celebrities, and I have not had an affair with Tiger Woods."

Speculation has swirled around Woods since a wreck outside his Florida home early Friday left him with minor injuries and a citation for careless driving. The Florida Highway Patrol said Tuesday that its citation closes its investigation of the crash. What do you think about Tiger's "transgressions?"

Woods was not required to talk to state police about the wreck and did not sit for an interview with investigators. He issued a statement Sunday saying he alone was responsible for the crash and denouncing "the many false, unfounded and malicious rumors that are currently circulating about my family and me."

The 33-year-old golf phenomenon has won the Masters tournament and the PGA tournament each four times, as well as three U.S. Open titles.

Investigators have said they don't have details on why Woods was driving away from his home at such an early hour. A police report says the wreck was not alcohol-related.

Uchitel said she has met Woods twice, once in her capacity as the VIP director at a club in Manhattan's trendy Meatpacking District and another time through a mutual friend.

"That's my job: to know these people, to have a relationship with them, to hang out with them," she told the Post. "It doesn't mean I am having sex with them or an affair with them."

She said the allegations "must feel horrible" to Woods' wife, Elin Nordegren.

"The worst part of it, it's not true," Uchitel said.