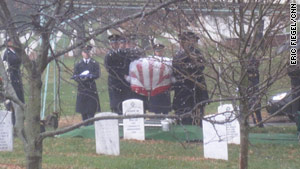 Lt. Col. Juanita Warman, a nurse practitioner with the National Guard, was to go on her second deployment to Iraq.
STORY HIGHLIGHTS
RELATED TOPICS

Washington (CNN) -- Huddling under umbrellas in a chilly rain, friends, relatives and comrades gathered at Arlington National Cemetery on Monday to lay to rest another of the victims of the massacre at Fort Hood, Texas.

An Army band played "America the Beautiful" as an honor guard folded the flag that covered the casket of Lt. Col. Juanita Warman, a nurse practitioner with the Maryland National Guard.

The 55-year-old grandmother had been slated for a second deployment to Iraq before her death in the November 5 rampage at Fort Hood, the largest U.S. Army post.

"She was extremely dedicated, she was extremely passionate, and I think it would be truthful to say that she died as she lived -- passionate, caring, and serving others," said Sheri Stern, a fellow nurse practitioner at the Veterans Affairs hospital in Baltimore, Maryland, where Warman worked.

Warman, the daughter and granddaughter of Army veterans, worked to help reservists readjust to civilian life after their deployments to Iraq or Afghanistan, Stern said. Lt. Col. Michael Gaffney, another National Guard officer, said Warman believed she could do more to help her fellow soldiers in Iraq.

"She truly believed that the further forward, the sooner that she could get hold of the folks that were having trouble, the sooner she could make a difference in their lives," Gaffney said.

Warman "knew the risks," both physical and psychological, he said, "and she willingly took that risk to go. I think that makes her a real hero."

Investigators say an Army psychiatrist, Maj. Nidal Malik Hasan, was the gunman who opened fire in a processing center at Fort Hood. He has been charged with 13 preliminary counts of premeditated murder and remains hospitalized after being wounded by a police officer during the assault.

The last funeral of those killed at Fort Hood will be the burial of Maj. Libardo Eduardo Caraveo, scheduled for Wednesday at Arlington.