Going into battle armed with a trumpet 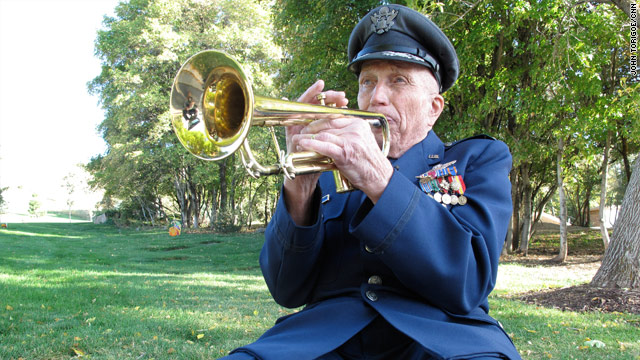 Bountiful, Utah (CNN) -- It was two weeks after D-Day, a few miles from the bloody shores of Omaha Beach. An airstrip had been carved out of the Normandy countryside, costing the lives of 28 Army engineers at the hands of German snipers.

A lone sniper still remained in the nighttime distance.

Despite the risk, Capt. Jack Tueller felt compelled to play his trumpet.

That afternoon, his P-47 fighter group had caught up with a retreating German Panzer division. As the U.S. Thunderbolts descended on their targets, they saw French women and children on top of the tanks. After an initial fly-by, the order was given to attack anyway.

"We were told those human shields were expendable," Tueller said.

Back at the airstrip, Tueller took out his trumpet. He'd used it on many a starlit night to entertain the men of the 508th Squadron 404th Fighter Group.

"I was told, 'Captain, don't play tonight; your trumpet makes the most glorious sound,' but I was stressed," he said. He was so troubled that he was willing to take a chance the sniper wouldn't fire.

"I thought to myself, that German sniper is as lonely and scared as I am. How can I stop him from firing? So I played that German's love song, 'Lilly Marlene,' made famous in the late '30s by Marlene Dietrich, the famous German actress. And I wailed that trumpet over those apple orchards of Normandy, and he didn't fire."

The next morning, the military police came up to Tueller and told him they had a German prisoner on the beach who kept asking, "Who played that trumpet last night?"

"I grabbed my trumpet and went down to the beach. There was a 19-year-old German, scared and lonesome. He was dressed like a French peasant to cloak his role as a sniper. And, crying, he said, 'I couldn't fire because I thought of my fiancé. I thought of my mother and father,' and he says, 'My role is finished.'

"He stuck out his hand, and I shook the hand of the enemy," Tueller said. "[But] he was no enemy, because music had soothed the savage beast."

"Boy, you have strong lips"

Tueller had learned to play the trumpet as a child growing up in Wyoming. His mother, a nurse, died at 29, and his father, a bartender and alcoholic, left the next day -- leaving Jack and his brother, Bob, orphans.

They left their home in Superior to live with an aunt in nearby Evanston. She gave Jack his first trumpet, and he quickly discovered he had a musical ear.

He was no enemy, because music had soothed the savage beast.
--Col. Jack Tueller

"In 1939, I was playing in Yellowstone Park in a dance band of 22 musicians at Lake Hotel. The famous trumpet player Louis Armstrong came up to the band during intermission and said, 'You sound pretty good for white cats,' " Tueller recalled.

He asked Armstrong what advice he would give a young trumpet player. "He said, 'Always play the melody, man. Look at them, see their age group, play their love songs, and you'll carry all the money to the bank.' "

Tueller enrolled at Brigham Young University, where he met his future wife and fellow trumpeter, Marjorie.

"This beautiful brown-haired gal with luscious lips said, 'Did you play the trumpet solo at the freshman assembly?' And I said, 'Yes, ma'am, I did.' She said, 'Boy, you have strong lips.' Being a sophomore, I said, 'Would you like to try me?' She nodded, and I went over and kissed her."

In 1941, as war clouds gathered, Jack enlisted in the Army and was sent to fighter school because he was an "individualist," he said.

"I wanted to fly it, fire it, navigate it, shoot the guns."

He once flew his plane through a dirigible hangar at Moffitt Field in Sunnyvale, California. The commandant was fuming mad.

"He stood me in a brace, then he kind of smiled and says, 'We don't want to quell spirit like that ... but don't do it again!'"

When D-Day arrived on June 6, 1944, Tueller was in the air, flying five missions.

I was an unruly child. ... Music tamed me.
--Col. Jack Tueller
RELATED TOPICS

"I witnessed the invasion from a ringside seat. We saw 2 million men, 10,000 ships. And we just shot at everything," he said. "We tried to help those men trying to get off the landing craft at high tide, where a lot of them were drowned.

"I remember feeling pride and sadness as I saw the bodies of 4,000 killed in two hours."

Tueller credits common sense and his first flight instructor, a crop duster, with his survival that day -- and the rest of the war.

"I learned to love low-level flying. I never came off enemy targets high. I'd lay it down a row of trees 400 knots, a foot off the ground, so all the flak would go over my head. They'd wonder where I'd gone."

Trumpet in the cockpit

Tueller managed to fly 140 missions without taking a single bullet hole to his airplane -- the name of his infant daughter, Rosanne, painted on the side.

"Everyone wanted to fly it; they thought it let a charmed life."

And on each mission, Tueller carried his trumpet in the cockpit.

"I took it in a little canvas bag attached to my parachute. I figured if I ever got shot down, it would go with me, and if I survived and got put into a prisoner of war camp, I could get an extra bar of soap from the guard."

His tour of duty ended just before his fighter group left for Belgium and the Battle of the Bulge. Three months later, his plane was shot down and destroyed. The pilot was killed.

Tueller went on to fight in the Korean and Vietnam wars, and served in the Pentagon during the Cuban Missile Crisis and the Cold War. He retired in 1966 as a colonel, having earned the Distinguished Flying Cross, almost two dozen air medals and two Legions of Merit, the nation's highest peacetime award.

Now 89, Tueller takes care of Marjorie, his wife of 68 years, who has Alzheimer's disease.

As Veterans Day approaches, he has a word of advice to veterans: "When you become a veteran, it's my opinion that you should do everything to make people realize the wonderful life that you really have."

He still has his trumpet of 70 years and still performs at schools, family get-togethers and church functions. He has a stereo system installed in the back of his family van, where he inserts a CD of big band music and begins playing the melodies of a bygone era.

"I was an unruly child," he said. "Music tamed me. ... My ambition as the last action on my part as a veteran is to hit high C and fall right into the grave. What a way to go!"