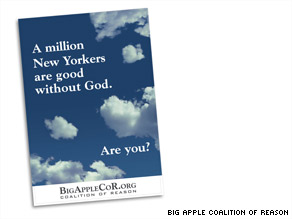 A coalition of atheist groups will place ads in New York subway stations next week.

Or at least that's what a coalition of eight atheist organizations are hoping, having purchased a month-long campaign that will place their posters in a dozen busy subway stations throughout Manhattan.

The advertisements ask the question, written simply over an image of a blue sky with wispy white clouds: "A million New Yorkers are good without God. Are you?"

On October 26, a dozen bustling New York City subway stations will be adorned with the ads as "part of a coordinated multi-organizational advertising campaign designed to raise awareness about people who don't believe in a god", according to a statement from the group, the Big Apple Coalition of Reason.

New York City's subway system is one of the busiest in the world with more than 5 million riders per day and more than 1.6 billion total passengers in 2008, according to the Metro Transit Authority.

Recognizing this, the Big Apple Coalition of Reason decided the "best bang for the buck" was to place posters in popular subway stations to capitalize on the amount of potential viewers, says Michael De Dora Jr., executive director of the New York Center for Inquiry, one of the associated atheist groups.

De Dora says the ambitions behind the advertisements are threefold.

First, the coalition hopes the promotion will enhance awareness of New York City's secular community. He explained that the coalition also hopes to encourage "talking and thinking about religion and morality," as well as support involvement in groups that encourage a sense of a social community for non-believing New Yorkers.

John Rafferty, president of the Secular Humanist Society of New York, another member group of the coalition, said the ads are in no way an anti-religious campaign. They are looking to reach out to more people who have similar feelings, but might not be aware of an outlet to express their beliefs, he said.

Rafferty and De Dora cite the American Religious Identification Survey, released earlier this year, as evidence of a shift away from organized religion. Those checking "none" for religion rose from 8 percent of the population in 1990 to 15 percent in 2008, effectively making "no religion" the fastest growing religious identification in the United States.

De Dora said that the "million" New York nonbelievers mentioned in the advertisements is the result of an extrapolation based on the survey's findings. With more than 8 million residents living in New York's five boroughs, the organization projects more than a million potential atheist New Yorkers.

De Dora said individuals "don't need religion to be good people and productive members of society" and ultimately he feels that groups of nonbelievers are "adding to cultural life of NYC."

The United Coalition of Reason, which is a national organization that helps local groups advocate atheist ideas, approached the New York nonbeliever associations in August with an offer of a donation from an anonymous source to help pay for the subway station ad campaign. The donation amount was for exactly $25,000 and specifically allocated for the subway advertising promotion.

Rafferty says the groups involved expect no substantial backlash over their ads. Since news of the campaign was made public early this week "reaction has been mixed," De Dora said. He emphasizes that the Big Apple Coalition of Reason ads are not "forcing issues, they're just getting ideas out there," with the hope of fostering discussion in New York.

The ads are "not poking fun at religion and not being outright nasty," he said.

A year ago some unease was caused by advertisements that ran inside subway cars promoting Islam. While the ads themselves weren't controversial, they were partially funded by an imam of a Brooklyn mosque who served a character witness for convicted 1993 World Trade Center bombing mastermind Sheikh Omar Abdel-Rahman.

In a statement to CNN, Metro Transit Authority spokesman Aaron Donovan said, "The MTA maintains basic advertising guidelines with prohibitions on nudity, four-letter words, and the like. Beyond that, to accord with the First Amendment, our advertising guidelines are written so as to not prohibit the free exercise of religion or abridge the freedom of speech."