FORT COLLINS, Colorado (CNN) -- The lawyer of a Colorado father accused of carrying out a bizarre hoax involving his son and a huge balloon said Monday that official charges in the case could be filed next week. 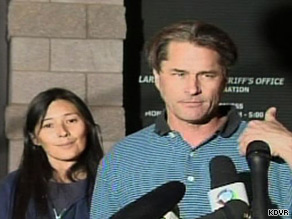 Richard Heene has told reporters that a runaway balloon incident involving his son was "absolutely no hoax."

Authorities announced that Richard Heene and his wife, Mayumi Heene, face several felony charges, but David Lane said the sheriff was overreaching with the charges.

"It's piling on and it's using charges that really aren't designed to fit this sort of allegation," Lane said on "Larry King Live." "The attempt to influence a public official fraudulently, that's bribing a public official. That's not what happened here."

The Heenes face charges of conspiracy, contributing to the delinquency of a minor and attempting to influence a public servant, Larimer County Sheriff Jim Alderden said Sunday. The family also probably will be charged with filing a false police report, which is a misdemeanor, Alderden said.

Lane has said that the couple is "not running from the law" and deserves the presumption of innocence.

"The sheriff having a press conference saying that they're guilty does not make them so," Lane told CNN's "American Morning."

Authorities say the event -- in which the tearful couple said their 6-year-old might have been trapped in the drifting balloon -- was staged.

Richard and Mayumi Heene had met in a Hollywood acting school and pursued fame for their family in the world of reality TV, Alderden said.

Lane, asked Monday by CNN about his client's state of mind, said it was "what you would expect someone's state of mind to be after law enforcement searched your house, seized your property, held a press conference announcing you're about to be charged with felony criminal charges. Your state of mind would be rather upset and you would feel somewhat under siege, which is exactly how the family feels at this point."

Watch how attorney says family is dealing with hoax allegations »

During the incident Thursday, as millions worldwide watched live TV coverage of the contraption floating above northern Colorado, authorities did not pick up on any deceptive behavior, Alderden said.

But that night, during an interview on CNN's "Larry King Live," the boy, Falcon, gave authorities an "Aha! moment," Alderden said.

"You guys said we did this for the show," Falcon said in the interview, when his father asked him why he had not come out from hiding when his parents were looking for him.

Richard and Mayumi Heene said their son was simply confused. Lane said on "Larry King Live" on Monday that he thinks Falcon was referring to his demonstration to reporters of how he hid from view.

But authorities enacted a game plan to get the truth, Alderden said. The plan included misleading the media on Friday when Alderden said authorities still believed the incident was not a hoax. They wanted to keep the couple's trust, the sheriff said.

"The sheriff put both of them on a box, and they have not shared with us whether or not they passed or failed," Lane told "American Morning" on Monday.

Polygraphs are not admissible in court, Lane added.

Alderden said that, under Colorado law, authorities cannot announce whether polygraph tests were taken -- only that authorities pursued them.

He added that authorities plan to seek restitution for the expenses incurred in the wild goose chase for Falcon.

Because authorities aren't required to share evidence until charges are filed, Lane said he could not lay out the Heenes' defense. "Until that point ... I'm shooting in the dark," he said, adding, "If they have probable cause to make an arrest, then make an arrest and give me the evidence." iReport.com: "Outraged" over balloon hoax

Alderden, speaking at a news conference Sunday, said authorities are concerned about the safety of all three Heene children, ages 6, 8, and 10. Authorities spoke with Mayumi Heene about domestic violence and the children's safety, the sheriff said. "But we didn't have enough that would allow us or child protection services to physically take the kids from that environment."

A 9-1-1 call from the home earlier this year led authorities to a "suspicious circumstance" that the sheriff said might have involved "domestic violence, perhaps against the wife."

Lane told CNN affiliate KMGH on Sunday that he has "no reason to believe they're anything but loving parents." iReport.com: "Balloon boy saga is symptom, not disease"

Speaking to CNN on Monday, Lane said the Heene children were in his office Sunday, and that by his observations as a father of three, "They seem to be perfectly, normal, happy, well-adjusted kids that are being insulated from this process as much as possible."

During a round of live TV interviews Friday morning, Falcon was sick, which many speculate was because he was upset about the incident.

One of the questions that remains unanswered is where Falcon was as the balloon drifted. On Friday, Alderden said it had been determined that the boy was hiding in an attic in the garage. Now, authorities are unsure. Alderden said the boy might not have even been in the home.

The Heenes have previously appeared on the ABC program "Wife Swap." Richard Heene also chases storms, brings his family along and takes videos.

TLC, which produces the show "Jon & Kate Plus 8" -- told CNN that the Heenes had "approached us months ago" about a possible show, "and we passed."

The sheriff said investigators want to interview researcher Robert Thomas, who worked with Heene for about two months this past spring. Thomas, 25, was paid by the gossip site Gawker.com to write about his experience with Heene for a story published on Saturday.

In an interview arranged with the help of Gawker, Thomas told CNN that at one point they talked about the Roswell UFO incident of the late 1940s, when Heene said it would be easy to cook up "a media stunt that would be equally profound as Roswell, and we could do so with nothing more than a weather balloon and some controversy."