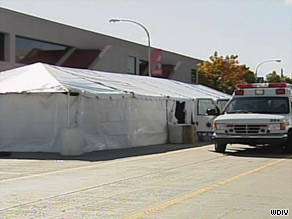 An EMT vehicle is at the scene Sunday in Detroit after three runners collapsed at a marathon.

A man in his 60s fell and hit his head, Roach said. The cause of the fall was unknown. The man was transported to Detroit Receiving Hospital, where he was pronounced dead.

Two other men, ages 36 and 26, also collapsed during the race and were pronounced dead at the hospital, Roach said.

All three collapsed near the end of the race, he said.

The weather at the time was overcast, Roach said, with temperatures in the low 40s.