(CNN) -- Three days after the world watched a giant balloon fly through the air as a tearful family expressed fears that their 6-year-old boy could be inside, authorities announced what millions suspected: The whole thing was staged. 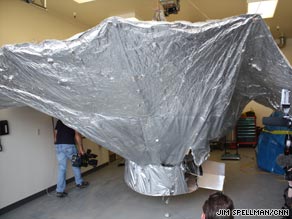 The "Aha!" moment that led authorities to realize what had happened was an interview with the family Thursday night on CNN's "Larry King Live," Sheriff Jim Alderden of Larimer County said Sunday. In the interview with Wolf Blitzer, filling in for King, the Heenes asked their son why he had not come out from hiding when they called his name.

"You guys said we did this for the show," the boy responded.

On Sunday, Alderden called the incident a "hoax," adding that investigators believe the evidence indicates that "it was a publicity stunt" by the family in hopes of "better marketing themselves for a reality television show at some point in the future."

The parents, Richard and Mayumi Heene, met in a Hollywood acting school and "put on a very good show for us," Alderden said. Authorities know there was "a conspiracy" between them, he added.

He said charges are expected to be filed in the case.

The couple's attorney told CNN affiliate KMGH that he hasn't seen any evidence beyond "speculation," but the Heenes would turn themselves in if charges are filed.

"All I'm saying if you've got some reason to arrest him, let me know, he'll turn himself in," said Denver attorney David Lane referring to Richard Heene. "If you got the goods, just tell me."

The sheriff said investigators also want to interview 25-year-old researcher Robert Thomas who worked with Richard Heene for about two months last spring. Thomas was paid by Gawker.com -- a popular gossip site -- to write about his experience with Heene for a story published on Saturday.

In an interview arranged with the help of Gawker, Thomas told CNN Sunday that as a student at Colorado State University with an interest in electromagnetic studies, he sought out Heene for a job as a possible research assistant. He said he ended up as his "stenographer," taking down Heene's ideas and proposals for reality-show pitches.

Thomas said that at one point they were talking about the Roswell UFO incident of the late 1940s, when Heene said it would be easy to cook up "a media stunt that would be equally profound as Roswell, and we could do so with nothing more than a weather balloon and some controversy."

Thomas said he wrote up the balloon idea, which he says did not involve any kids going missing, as a potential reality show episode. "I didn't know that he was going to do something like this," Thomas told CNN Sunday.

Thomas said he eventually quit working with Heene in May.

The sheriff's announcement included an admission that authorities misled the media on Friday when they said they still believed it was not a hoax. After Falcon's remark on CNN Thursday night, "it became very clear to us at that point that they were lying," Alderden said.

The "nonverbal responses" and "verbal cues" from the children at that moment made it clear, Alderden said.

But to get to the truth, "it was very important during this time that they maintained their trust with us." So investigators misled the media while they carried out their "game plan" of gathering the truth.

That plan included pursuing separate interviews with the Heene parents and polygraph tests, partly by arguing that it could help end the media frenzy surrounding them, Alderden said. He added that by law he could not say whether those tests were taken.

The Heenes have repeatedly denied any hoax. In an interview Friday with CNN's "American Morning," Richard Heene said Falcon's remark was a reference to the media that had assembled in front of the family's home.

Charges have not been filed, but authorities expect to recommend felony charges including conspiracy, contributing to the delinquency of a minor and attempting to influence a public servant, Alderden said. They also plan to recommend a charge of filing a false police report, which is a misdemeanor.

He also said it is unlikely that someone convicted of these charges would face jail time.

One of the key questions that remain unanswered, Alderden said, is: Where was Falcon as police searched for him? On Friday, Alderden said it had been determined that the boy was hiding in an attic in the garage, and had fallen asleep. Now, authorities are unsure. Alderden said the boy may not have even been in the home.

"The biggest error we made is when we searched the house very clearly we didn't search the house as thoroughly as we should," he said. Authorities had assumed a 6-year-old boy could not have reached that attic, he said, so they took the Heenes at their word that he had hidden there the whole time.

The Heenes have previously appeared on the ABC program "Wife Swap." Richard Heene chases storms and brings the family along.

After the Hollywood gossip Web site TMZ.com reported that the Heenes had been "pitching a reality show about the wacky family," one of the networks mentioned -- TLC, which produces the show "Jon and Kate plus 8" -- told CNN that "they approached us months ago, and we passed."

Alderden also said authorities are concerned about the safety of the three children, ages 6, 8, and 10. In fact, authorities spoke with Mayumi Heene "at length about domestic violence" and the children's safety, Alderden said. "But we didn't have enough that would allow us or Child Protection Services to physically take the kids from that environment." iReport.com: "Outraged" over balloon hoax

A 911 call was made from the home earlier this year that led authorities to a "suspicious circumstance" that Alderden said may have involved "domestic violence, perhaps against the wife."

Lane, the Heenes' attorney, told KMGH that he has "no reason to believe they're anything but loving parents."

In an interview Friday with CNN's "American Morning," the Heene parents -- looking exhausted -- expressed relief that their son was alive. "I'm feeling very, very grateful that Falcon is among us," Richard Heene said. iReport.com: "Balloon boy saga is symptom, not disease"

Mayumi Heene said that the family was sitting in their living room, distraught and terrified for missing Falcon, when he walked into the room.

"[It] felt like from nowhere. When I first saw him, I couldn't even believe it. I couldn't comprehend right away," she said, adding that the next moment she was "just jumping, calling his name." She began to "scream and cry, and I just enjoyed that moment."

CNN's Greg Morrison and Janet DiGiacomo contributed to this report.