(CNN) -- The decision to award President Obama the Nobel Peace Prize for his efforts to "strengthen international diplomacy and cooperation between peoples" appears to have left some in the United States divided over whether intangible achievements are worthy of such an esteemed award. 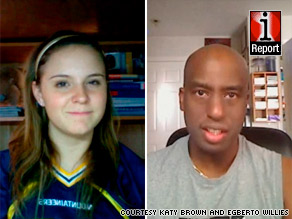 Twenty other Americans have won Nobel peace prizes. Among them, President Theodore Roosevelt won the Nobel Prize in 1906 for negotiating a peace settlement in the Russo-Japanese War, and President Wilson for the creation of and advocacy for the League of Nations.

While the committee's decision to honor Henry Kissinger in 1973 was widely criticized by some, his peace prize was awarded for helping to end the Vietnam War.

The Nobel committee said of Obama: "Only very rarely has a person to the same extent as Obama captured the world's attention and given its people hope for a better future."

Brown, who goes to school in Kent, Ohio, and calls herself a conservative, said she couldn't believe based on the lack of accomplishments so far in his first term as president that Obama was given the award.

" 'SNL' put it best, whether you want to call it a comedy skit or not, this man has done two things: jack and squat," Brown said, referring to this past weekend's "Saturday Night Live" skit that characterized Obama as a man with many promises who hasn't fulfilled them.

"Has he ended a war? No. He's only made matters worse. Has he provided health care for everyone? No. He's just caused a big disaster in Congress.

"And has he even closed Guantanamo Bay, the first thing he [said he would do] when he was in office? No; hasn't even done that." Rollins: Obama must now "earn" Nobel Peace Prize

For others, it's not about Obama's political initiatives. For them, it's more about the message Obama is sending to the rest of the world and the hope he has given them.

"To move a country like the United States -- in the eyes of all countries around the world -- from being perceived as one of the most belligerent Americas ever to one that decides it wants to work with the rest of the world -- that is the real definition of a path towards peace," iReporter Egberto Willies said. Zakaria: Nobel honors Obama's "bold gambit"

Willies, a 48-year-old from Kingwood, Texas, who described himself as a liberal, was proud of Obama's intangible achievements.

"I felt like we were reintegrating back into the world," the software developer said. Obama is more inclusive of other countries. That's important."

Like Brown, Thomas Strom, a 39-year-old salesman from Wallingford, Connecticut, who described himself as a conservative, couldn't grasp the committee's decision.

"Obama hasn't accomplished anything to deserve an award of such stature," he said.

Strom couldn't help but wonder what it meant for future recipients.

"This is almost turning the Nobel Peace Prize into a bogus award," he said.

Matt Milam, an iReporter and Obama supporter from Chicago, Illinois, said while he was thrilled to see Obama win, he understood why some people might question it.

"I'm personally glad for the man, but some people are sitting around scratching their heads. And perhaps there's a good reason. He's still fresh in the White House and yet he's getting the Nobel Peace Prize. Maybe it's just that he's just that good."

And the fact that Obama said he was surprised at the award and humbled, and didn't question it, made Milam support it even more. He compared it to Cuba Gooding Jr.'s surprising Oscar win for his role in "Jerry McGuire."

Milam hoped that despite what people felt about Obama winning the award, it would serve as an inspiration for the country.

"It's something to strive for so let's be glad for President Obama."