YOSEMITE NATIONAL PARK, California (CNN) -- Her hands are like the grand and timeless Yosemite Valley where she has lived the better part of 60 years. They are strong and steady, with the feel of permanence like the smooth granite faces of El Capitan and Half Dome. 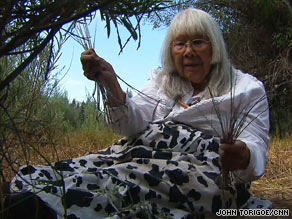 Her agile fingers still weave willow branches into masterful baskets. They are traditional baskets that are displayed around the world and have garnered her attention from adoring fans.

She considers the Earth her lifeblood. She is a living metaphor for a hard-earned life spent caring for the land.

Julia Parker, 80, is Native American. Born in Northern California, she is a mix of Coastal Miwok and Kashia Pomo tribes. "I do have an Indian name that was given to me. I'm called Hoo Wee Na, that means 'person of peace.'"

She is a park ranger with Yosemite National Park. She works as Native American cultural demonstrator at the Yosemite Museum. There are many 20-and 30-year employees at Yosemite, but Julia is the oldest and longest-tenured park employee with over 40 years.

"Julia interprets Native American culture to our visitors,"Yosemite National Park spokesman Scott Gediman says. "She shows visitors how baskets were woven, toys or brushes were made and acorns collected from native black oak trees, ground up using a metate and made into mush."

"Julia is truly a national treasure," he adds. "She's been honored by universities, she has baskets all over the country, she's consulted with museums."

In 1983, Parker presented Queen Elizabeth II a basket she'd worked on for a year. Her work is displayed in museums like the Smithsonian.

Her parents died when she was 12, leaving five children orphans. Since she was the oldest, Parker tried to keep all of the kids together. They went to an Indian boarding school in Carson City, Nevada.

When she turned 17, Parker took a job laundering clothes for the Yosemite Park and Curry Company. She lived in the Indian Village and married Ralph Parker, a Mono Lake Piute. His tribe's Yosemite roots date back nine generations. His mother, Lucy Telles, was a renowned basket maker and, along with the other Yosemite women, passed down their basketry skills to Parker.

Parker's daughter Lucy is learning basketry from her mother.

"She's a living legend," Lucy Parker says. "She's known throughout the world. People will come to Yosemite to visit her here."

Lucy Parker is accomplished in her own basketry and is determined to keep the Yosemite traditions alive.

"My mom Julia has guided me through the heart of basket making. She's taught me to give thanks, give blessings."

Julia Parker is sitting in the shade of the willows. She has stripped the stalks of their small leaves and begins fastening a base to a quick basket. Her seasoned hands and sharp eyes thread willow stalks as another basket takes form. She hums a tribal song. Its words are sacred and not for outsiders' ears. The sheer walls of Yosemite Valley frame a living legend.

"I learned from my elders. They told me, 'Julia, you take from the Earth with a please and give back with a thank you."

All About Yosemite National Park