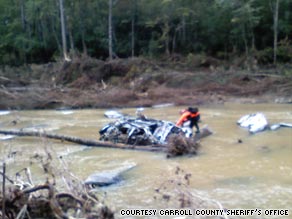 Authorities sort through the wreckage thought to be Debbie Hooper's car. She went missing September 20.

So when Hooper, who juggled two jobs to support her family, didn't appear at her dispatch job for a transportation company last Monday morning, her daughter Jessica Bartke, 19, knew something was wrong.

"She's always at work," said Bartke, who lives in Winston, Georgia, about 10 minutes from her mother's home. "She was never lazy. I knew something had to be wrong."

Nearly a week after the torrential downpours that left the metro Atlanta area drenched, authorities are still searching for Hooper's body, which was last believed to have been in the Dog River in Douglas County, west of Atlanta. Late Monday afternoon, authorities discovered a female body in the Dog River Reservoir, said Brad Robinson, chief deputy of the Carroll County Sheriff's Office. They are waiting for lab work to identify the body, which is expected to be released Tuesday afternoon.

Six flood-related deaths already have been reported in Douglas County.

Last Friday, when the water ebbed, a search crew of nearly 25 law enforcement officers from Carroll and Douglas counties uncovered Hooper's vehicle, a Jeep Liberty, stuck in the water in the Dog River. The team also recovered Hooper's purse.

"It was like putting an ant in front of the fire hose," said Sheriff Phil Miller of the Douglas County Sheriff's Office. "The little Jeep Liberty looked like it had been put in a crusher and beat into pieces."

The following Saturday morning, more than two dozen authorities and four cadaver dogs continued to search the Dog River area. Miller said the water flow had been constant, which means the body could have drifted into the Chattahoochee River.

Hooper remains the last missing flood victim in the Atlanta area, but in Tennessee, a man who disappeared after swimming in an overflowing ditch on a dare is still missing.

This month's storm has been one of the worst in Southeastern U.S. history. The death toll in Georgia and Alabama has risen to 10.

Gov. Sonny Perdue has declared a state of emergency in 17 flood-stricken counties, and State Insurance Commissioner John Oxendine estimated that the flooding has caused $250 million in losses.

Bartke, Hooper's daughter, has taken her 15-year-old brother into her home. She says they are both distressed about not knowing where their mother may be.

"We talked every day," Bartke said. "We spoke to each other even if we were busy, even if it was for two seconds just to say 'Mom, I love you. I'm busy right now, but I will call you back.' "

All About Georgia • Floods