NEW YORK (CNN) -- President Obama spoke at the Pentagon on Friday to those who lost loved ones on September 11, 2001, telling them no words would heal their pain yet calling for a renewed resolve against the ones who attacked the country eight years ago. 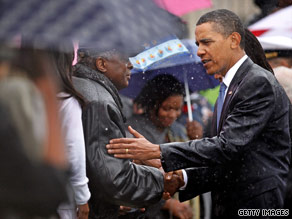 President Obama addresses family members and friends who lost loved ones on September 11, 2001.

Obama laid a wreath of white flowers at the Pentagon, where 184 people lost their lives when a hijacked jet smashed into the military icon outside the nation's capital.

"No words can ease the ache of your hearts," Obama told a crowd of relatives and friends standing under umbrellas in a steady rain. The plane, American Airlines Flight 77, struck the Pentagon's west wall.

Earlier in the day, the president and first lady Michelle Obama held a moment of silence outside the White House to mark the eighth anniversary of the al Qaeda attacks that killed 2,752 people.

At the Pentagon, Obama was introduced by Defense Secretary Robert Gates, who spoke of the "great pinnacle of sacrifice" shown that day.

"Eight Septembers have come and gone," Obama said. "Nearly 3,000 days have passed, almost one for each one who has been taken from us.

"We recall the beauty and meaning of their lives," he said. "No passage of time, no dark skies can dull the meaning of that moment.

Watch a slideshow of Obama's speech and the day's events »

"Let us renew our resolve against those who perpetrated this violent act," Obama said.

The nation paused at the moments when the planes crashed into the World Trade Center towers and the Pentagon -- symbols of America's financial and military might -- and at a field near Shanksville, Pennsylvania. Officials believe that plane's target was either the White House or the Capitol.

There was silence at the site of the former World Trade Center at 8:46 a.m., the time the first plane struck the North Tower, followed by another at 9:03 a.m. when a jet struck the South Tower.
iReport.com: 9/11 emotions surge back in sculpted tributes, memories on video

Family members and friends of those killed read their names in solemn roll calls at each site as bells tolled.

In London, England, U.S. Ambassador Louis Susman and his wife, Marjorie, laid a wreath at the September 11 Memorial Garden in Grosvenor Square.

At ground zero in New York, a woman whose husband worked on the 94th floor of one of the twin towers recalled that day.

"The pain can still be so sharp. ... I realize how much my life has changed," she said, mentioning that her children have now grown and she has grandchildren.

Her husband left many lessons, she said, including "the courage to be kind."

"Appropriately, the city of New York has taken up that call. From this day forward we will guard the memories of those who died by rekindling the spirit of service and help keep us strong," Bloomberg said.

At the Web site set up for that day, people were listing their charitable acts.

One man who spoke to the crowd at ground zero remembered his brother, a partner at a law firm near the twin towers and a longtime volunteer firefighter. He rushed "toward the inferno," to do what he could to help, the brother said.

"He was there when the tower collapsed."

Near Shanksville, people gathered at a field where the 40 passengers and crew of United Airlines Flight 93 died. The passengers and crew, aware of the fate of other hijacked planes, fought the men who had taken control of their aircraft, leading to its crash.

Former Secretary of State Colin Powell gave the keynote address at the 2,200-acre site, where a $58 million memorial is scheduled to open in 2011, on the 10th anniversary of the attacks.

No one could capture the terror the 40 people aboard Flight 93 must have endured, Powell said. They were strangers to each other who "represented the very best diversity that is America," he said.

"In place of fear, they found the courage of attack," he said. "They seized the moment, and they lost their lives in so doing. We are here to ... honor their spirits."

Powell said he believes the United States is safer since the attacks.

He pointed to improvements in the visa system, which gives officials a better idea of who is coming into the country; creation of the U.S. Homeland Security Department and beefed-up security at airports. Powell said there also have been improvements in law enforcement and intelligence-gathering. Engaging the terrorists in Afghanistan also is a solid move, he told CNN.

The level of concern about terrorism in the United States is roughly half of what it was immediately after September 11 and is down 20 points since the five-year anniversary in 2006, according to a new CNN/Opinion Research Corporation poll.

Thirty-four percent of Americans think an act of terrorism is likely in the United States over the next few weeks. More than six in 10 have confidence in the Obama administration's ability to protect the nation.

All About Barack Obama • Colin Powell