MINNEAPOLIS, Minnesota (CNN) -- Melissa and Jackson Brandts knew right away that the photo from their recent trip to Canada was a good one. 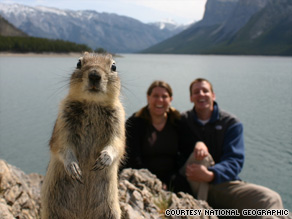 Melissa and Jackson Brandts were taking a photo of themselves when the squirrel popped up.

However, it wasn't until the world -- and National Geographic -- took notice that they realized exactly how good.

Now, after submitting it to the magazine's online "Your Shot" contest, the Minnesota couple's photo is set to grace the pages of the magazine's November issue. It's appeared on the Web sites of news outlets around the world, and the squirrel -- now dubbed "Crasher Squirrel" -- even has its own Wikipedia entry of the same moniker.

Melissa Brandts and her husband Jackson were hiking in Banff National Park the last week in May when they decided to set up their camera and use their wireless remote shutter for a few shots of the two of them. They were getting situated on the rocky shore near Lake Minnewanka when the now-iconic critter stopped by for a visit.

"The little squirrel had been running around while we were getting the shot set up," Melissa Brandts said in a phone interview Tuesday. "I was joking with my husband that I hoped he was friendly because he was getting awful close and kind of scampering around our feet and stuff."

Friendly? You might say so. It was also a bit timid and perhaps even indecisive because it soon scurried away and then, just as quickly, rushed back again.

"Photogenic" might also be a good word to describe it.

"All of a sudden he popped back up because he heard the shutter releasing, the clicking of the camera. The only thing we can figure is that he thought it was going to give him food or something," Brandts said.

The resulting image exceeded all expectations.

"We didn't realize how good it was until we got back to the hotel that night and downloaded it to my husband's computer, and when we could see it on the full screen we were like, 'Whoa, are you serious?'"

"We had no idea it was going to turn out exactly like it did with him being in perfect focus, us being out of focus, and then us just laughing in the background. We weren't sure if he'd be standing like in front of one of us or something like that."

Brandts said she and her husband showed the photo to their friends and family and were subsequently incessantly prodded to "do something" with it.

For months the two weren't sure what that something could be. That changed, however, when the latest issue of National Geographic arrived in the mail.

"I saw the 'Your Shot' contest, which of course I knew existed, but I had never thought of entering one of my own pictures into it," Brandts said. "I thought, 'This is what I'm going to do!'"

Brandts said she submitted it on August 5 and by August 13 it was NationalGeographic.com's photo of the day.

"Things just kind of spun out of control from there."

The photo was soon published in the pages of two national Canadian newspapers, and Brandts received calls from a friend in South Korea who'd seen it on a local South Korean news Web site.

The couple has since appeared on NBC's "Today" show as well as the Twin Cities' local affiliate KARE.

And now that it's been selected for publication in the November issue of National Geographic, the attention hasn't subsided.

As of this writing, Brandts has received Facebook messages from random fans in 29 different countries. The Facebook group "Nuts the Squirrel is a Legend" comes complete with 5,300 fans and counting.

The squirrel is also being used by Banff National Park in advertising on its Web site, and it has created a Banff squirrel Twitter account.

There's even a Web site dubbed "The Squirrelizer," which has apparently been created for people who feel their photos lack a certain "squirrel charm." The site's tool will paste the squirrel cutout onto any picture uploaded.

Other sites have pasted the squirrel onto various scenes from history, from the D-Day invasion at Normandy to the Apollo moon landing.

And it hasn't stopped there.

"It keeps popping up everywhere, like at my husband's job," Brandts added. "If people are giving him a presentation, all of the sudden they'll have a squirrel pop up."

It was during their appearance on "Today" that host Matt Lauer raised questions about the possibility the photo could have been doctored. Brandts assured him, as she did once more for CNN, that the photo is "completely authentic" but said she understood the skepticism because people had originally thought the photo was taken simply with a timer -- as opposed to the remote shutter she used in actuality -- which, if it were the case, would have kept the couple in focus and blurred the squirrel.

"National Geographic looked at the full high-resolution [image, and] realized it was authentic," Brandts said, adding, "You can't make this stuff up."