Robin Meade talks anxiety and her road to self-confidence

Below is an excerpt from HLN "Morning Express" anchor Robin Meade's new book, Morning Sunshine!: How to Radiate Confidence and Feel It Too published by Hachette Book Group. The following takes place when Robin was working as a weekend anchor in Chicago, Illinois. 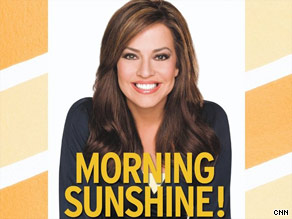 Robin Meade's book "Morning Sunshine!: How to Radiate Confidence and Feel It Too" hits shelves September 10.

I looked down at the copy of the news story. My stomach clenched. My heart started palpitating. I think I held my breath without realizing it.

The floor director gave me the cue, pointing at me as the camera came up on my face.

I felt sweaty. Just as I opened my mouth to speak, the set seemed to fade into a gauzy haze. My breathing was jagged. The words came, but my voice was quivering so much it sounded like a kid singing into a big box fan on a humid summer day: "Bray-ay-ay-ay-king new-ew-ew-ews tonigh-igh-ight."

My hands shook uncontrollably, and I was huffing and puffing as if I were running mile twenty five of the Chicago Marathon. These were not the controlled, measured tones of someone who had been doing this for a living for years. My heart pounded in my ears, and my face flushed. I was losing it, right there with who knows how many thousands of people watching.

What the hell is happening? As I delivered the facts of the story, I didn't hear a thing that came out of my mouth. All I heard were my own thoughts.

Oh, no, you're screwing up!

Oh, no, your bosses are probably watching!

You're going to get fired!

How will you pay your mortgage?

What will people think of you?

And then, of course, Holy crapola, where is that sound bite?

Can you see how the cause-and-effect relationship of my thoughts just engulfed me in doom and gloom? I couldn't keep my mind on the story. I totally slipped into imagining the future and the horrible repercussions of my screwup.

Because I'm writing this today, you can tell that somehow I lived to see the sound bite that evening. The whole looking-like-I-was-hopped-up-on-six-energy-drinks episode lasted only seconds. But it seemed like an eternity.

Robin and her ensemble cast help viewers jump start their day with a fast-paced look at the day's news. Give your morning news a wake-up call on HLN.
6-10 a.m. ET Monday - Friday

Now Josh, the I'm-going-to-be-a-reporter-someday crew member, and Michael, the I-really-want-to-be-a-rock-star prompter operator, were around me, wearing the same expression you'd have after witnessing a car wreck.

"Robin, are you okay? Do you need a glass of water?" Josh's eyes were wide open, as if he really wanted to shout, "Dude!" He didn't know what to make of this.

"Yeah, please," I croaked. My mouth was cotton. I wished I had a trough to douse my head in instead of a tiny Dixie cup of water.

"Everything okay out there?" the producer chimed in on my IFB, the earpiece through which the producer and director talk to anchors during the show without the folks at home hearing it.

What to say, what to say? "Oh, sorry about that. Wow, that was weird! I lost my breath or something." I faked a half-laugh at the end of that statement for their benefit.

When Josh handed me the glass of water, I was surprised to see my hands were still trembling. I noticed how incredibly weak I felt, and I noisily gulped down the water the way my dog does at his water bowl after he's been chasing squirrels for an hour.

Get it together, Robin!

Miraculously, by the time we came out of the video and I had to speak again, it was as if nothing had happened. Except for feeling wiped out, I was back to sounding authoritative and in control, even tilting my head and smirking sheepishly as if to say, You'll forgive me for that little freak-out I just had.

As the student body filed in for the Christmas assembly, I started jumping rope with a holiday garland. I was standing out on the gymnasium floor, and with each leap over the garland I felt a swish! After a few times, I realized the garland was catching my knee-length choir dress in the back and flicking the skirt hem waist-high, exposing my bum for the entire eighth grade seated behind me.

And laugh I did! Wouldn't you know it? The school photographer caught the moment: there I am in the 1987 yearbook laughing with my mouth wide open, my eyes as big as saucers, and my hands behind me, having just pushed my skirt back down.

I have no problem laughing at myself in situations like that.

My point in telling you this embarrassing story is that you can see I don't have trouble laughing off most situations. But my job? That was another matter.

No, I was not going to be able to shrug off the "breathing problem," as I had called it, trying to minimize its impact, even though it had completely bamboozled me on the air. It was all I thought about after the show, driving down the darkened streets of Chicago's Streeterville to our condo, still gripped with humiliation.

I felt as though every tourist lugging her shopping bags from the Magnificent Mile back to her hotel, every vagrant panhandling for handouts, and every pedestrian who called the city home knew I had just made a complete fool of myself. My brain should have been full of concussions, I was beating myself up so much.

How badly was I cursing myself? I didn't care to stop for my usual Cheesecake Factory late-night treat, let's put it that way. My stomach was still in knots. I didn't turn my eyes to gawk at the car pumping the thump-thitty-thump-thump bass at the stoplight, and I barely noticed anything around me on the drive home. I couldn't even feign a smile for the friendly doorman as I entered our high-rise building.

The ride to the thirty-seventh floor seemed to take forever. Every time the elevator halted and the door opened I held my breath, afraid the person joining me on the ride had seen the screwup and would ply me with questions.

Tim met me at the door. He had seen the "breathing problem" on TV for himself. I learned later it bolted him upright from his viewing perch on the couch.

"Did you watch me?" I asked, hoping he'd say, "Oh, I sensed a little glitch on your part."

Instead he just nodded, and I saw the worried look on his face. He didn't say much. He was waiting for me to go first.

Finally, in the kind of voice you'd use to soothe a colicky baby, he asked, "Honey, what happened? Are you okay?"

I didn't know the answer.

Excerpted from MORNING SUNSHINE!: How to Radiate Confidence and Feel It Too by Robin Meade. Copyright (c) 2009 by Robin Meade. Reprinted by permission of Center Street, a Division of Hachette Book Group. All rights reserved.