NEW YORK (CNN) -- Two George Washington Bridge security guards photographed sleeping on the job have been fired, according to the Port Authority of New York and New Jersey. 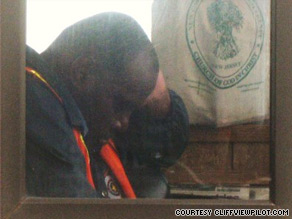 A bicycle tour operator who commutes daily over the bridge from New Jersey to New York snapped photos of the two guards on different occasions, and the photos were published on a New Jersey local news Web site.

In one set of photographs by commuter Joey Lepore, taken during a Wednesday rush hour at 7:15 a.m., a guard tilts his head downward and dozes. The other snoozer's on-the-clock siesta is more brazen: he uses his arm as a pillow as he dozes at 10:15 a.m. last Monday.

Before releasing the photos, Lepore hesitated, knowing it would likely cost the guards their jobs. But ultimately he decided the security of thousands outweighed the job security of two.

"If there's two people on this bridge who don't care about my safety and the safety of anybody who comes over this bridge, then I really don't have an obligation to withhold what I have," he said.

Given the George Washington Bridge's iconic status and huge traffic volume, officials have long cited it as a potential terrorist target.

Lepore said he was moved to photograph the slumbering sentries after witnessing the same guard napping on three occasions.

"The first time I shrugged it off and said, 'I can't believe he's sleeping,'" said Lepore. "The second time I was very annoyed. Third time -- that's it."

Lepore said he later approached the guard, told him he had caught him asleep at his post three times, and said he had the photos to prove it. The profusely apologetic guard vowed it would not happen again.

Three weeks later, it did happen again, but this time with a different guard, according to Lepore.

Instead of discreetly taking photos from a distance, an indignant Lepore marched up to the guard's booth and snapped away. The guard did not stir.

The sleeping guards were employees of FJC Security, a security contractor used by the Port Authority, which operates the George Washington Bridge along with all other bridges leading into Manhattan.

In a statement, the Port Authority sought to assure commuters it views security as an issue of utmost importance, and urged people to report holes they notice in its defenses.

"The Port Authority takes the safety of its passengers and facilities very seriously and has spent more than $4 billion on security since 9/11. The Port Authority welcomes the public's vigilance on matters of safety and security and we encourage our customers to contact us if they encounter anything out of the ordinary," the agency said.

Although the guards' names were not released, the Port Authority said in its statement, "The two guards have been fired by the security contractor, FJC Security."

FJC Security did not respond to CNN's calls for comment.