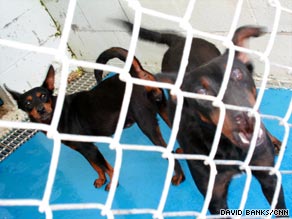 Two dogs from the pack that killed two people await euthanasia Tuesday at a shelter in northeast Georgia.

Sheriff's deputies, code enforcement officers and other officials spent most of Monday and Tuesday rounding up 11 adult dogs and five puppies, Oglethorpe County Sheriff's Capt. Shalon Huff said. One more was trapped Wednesday morning, leaving one still to be captured, she said.

"We're just lucky this hasn't happened before," said Susan Fornash, director of the Madison Oglethorpe Animal Shelter in Danielsville, where the captured dogs were held before being euthanized Tuesday under orders from a local judge.

Investigators say they believe that University of Georgia librarian Sherry Schweder, 65, went for her usual morning walk Saturday down Howard Thaxton Road, the narrow dirt lane that runs alongside the couple's property.

The dogs were familiar in the area, investigators say, having been left behind when the person who had been caring for some of them moved out of a home at the end of the lane.

Authorities theorize that halfway down the lane, about a quarter-mile from her home, Sherry Schweder was confronted by the dogs, which knocked her down and killed her.

Her husband, retired UGA language professor Lothar Schweder, became concerned when she didn't return and went out in their Honda CRX to look for her. When he found her lying in the lane and got out to shoo away the dogs, they attacked and killed him too, investigators believe.

Although no blood was seen on the dogs, other evidence and autopsy results convince authorities that the pack killed the Schweders, said Jim Fullington, special agent in charge of the Georgia Bureau of Investigation's office in nearby Athens.

Black bears occasionally pass through the area, but none have been reported recently, said Sgt. Doyte Chaffin, a wildlife officer with the Georgia Department of Natural Resources. Investigators found no prints other than those of dogs and humans, Fullington added.

Humans can appear threatening to dogs that run in packs, said Bonnie Beaver, a professor in the department of small animal clinical sciences at Texas A&M University and an expert in pack behavior.

"From their perspective, a person is an alien, if you will," Beaver said. "It would be the same as we would relate to a grizzly bear."

Dogs kill an average of 10 to 20 people each year in the United States, Beaver said. The vast majority of those cases involve a single dog attacking a small child, she said.

As few as two or three dogs, whether urban, suburban or rural, can behave like a pack, Beaver said. And when pack mentality takes over, "they do insane things that they would not do" under normal circumstances, she said.

"My bet is there was one ringleader who kind of started it" in the Georgia case, Beaver said.

Something as simple as making eye contact may have made one dog in the group feel threatened, and its body language put the other dogs on edge, triggering an "escalation," she said.

Even though none of the dogs weighed more than about 40 pounds, their numbers would have overwhelmed the victims. Screaming, flailing or trying to run would only make things worse, Beaver said.

Jehovah's Witnesses walking up the lane to visit the lone house found the Schweders' mutilated bodies lying next to the car and called 911, Fullington said. He added that a sheriff's deputy had to fire a shot in the air to scare the dogs away.

The house the evangelists had intended to visit was unoccupied, but it was home to at least some of the dogs, Fullington said.

The owner, Howard Thaxton, had moved out some months earlier because of health and financial problems but had someone drive him every other day to leave food for the dogs, said GBI Special Agent Christopher Bish. Several empty 40-pound bags of Ol' Roy dog food were strewn about the property Tuesday.

Thaxton, an amputee who Bish said was recently released from a hospital, has been cooperating with authorities. Thaxton doesn't believe that those animals were capable of killing people, law enforcement officials said. He has not been charged.

"We are still in discussions with the district attorney about culpability and what have you, but no decisions have been reached yet," Bish said.

Bish said it took 14 visits to Thaxton's house to make initial contact with him. CNN's efforts to find Thaxton for comment were unsuccessful.

Stopping the dogs from reproducing might have prevented the tragedy, Fornash said. Just a few dogs can multiply rapidly into a menace, she added.

"In the blink of an eye, we have a pack of 50 dogs because people don't spay and neuter," she said.

It took about 90 minutes to euthanize all 16 dogs, several of which were maggot-infested, Fornash said. No one asked that they be checked for rabies, and the sheriff directed that the carcasses be cremated immediately, she said.

"I'm heartbroken for the family," Fornash said. "I can't even imagine how they must feel. And I'm also very sad for those animals, because if they had been cared for the way they should have been, this wouldn't have happened. It's not their fault."

The Schweders' seven dogs and four of their cats were to be brought to the shelter Wednesday and eventually adopted out, she said.

Thaxton's wood frame house that served as the dogs' home sits at the edge of a forest dotted with hunting campers and abandoned 1950s vehicles. Empty 5-gallon water bottles fill a ravine behind the house, and a derelict 1980s Chevy Caprice crouches next to a rusting John Deere tractor under a shade tree.

After all the sheriff's deputies and trappers had left Tuesday afternoon, a scruffy red dog appeared, ears up, next to the tractor. The animal, alone, scampered off into the woods.

All About Georgia • Animal Attacks • Pets