NEW YORK (CNN) -- Investigators have raised the wreckage of the helicopter involved in Saturday's deadly mid-air collision over the Hudson River, but they were still looking for the small plane involved in the crash, authorities said Sunday. 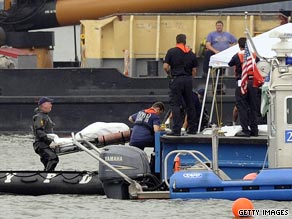 Divers unload a body from their raft onto a police boat Sunday. Nine people are believed dead in the crash.

New York police said they believed side-scan sonar pointed them to the wreckage of the Piper Saratoga PA-32 just north of where the helicopter went down, but Deborah Hersman, chairwoman of the National Transportation Safety Board, said swift current and low visibility were hindering divers. The search stopped as a storm approached Sunday evening and will resume Monday morning, police said.

Nine people, including five Italian tourists, were aboard the two aircraft when they collided over the river shortly before noon Saturday. Seven bodies had been pulled out of the river by Sunday afternoon, Hersman said.

Authorities believe none of the nine people aboard the two aircraft survived the crash.

Neither aircraft was required to carry electronic "black boxes" that record cockpit voices and flight data on larger planes, but electronic navigational devices on board might retain some information that could help the probe, Hersman said.

Investigators are trying to establish the facts of the crash but won't determine the probable cause for some time, Hersman said.

See where the collision occurred »

"We are looking at everything. Nothing has been ruled out at this point in time," she said.

Most of the Eurocopter AS350 had been lifted out of the Hudson on Sunday and taken to a pier in Hoboken, New Jersey, across the river from Manhattan, for examination, Hersman said. The helicopter was taking the five Italians on a 12-minute sightseeing tour around New York and had taken off from a heliport in midtown Manhattan shortly before the crash, she said.

New York police identified the pilot of the helicopter as Jeremy Clark, 32. He had worked for the operator, Liberty Helicopter Sightseeing Tours, for about a year and a half and had 2,700 helicopter flight hours, Hersman said. iReport.com: Were you there? Send images

The plane took off from a Philadelphia-area airfield Saturday morning, landed at New Jersey's Teterboro Airport and was bound for Ocean City, New Jersey, with three people aboard -- the owner and pilot, Steven Altman, 60, of Ambler, Pennsylvania; his brother, Daniel Altman, 49, of Dresher, Pennsylvania; and Daniel Altman's son Douglas, 16.

View images from the scene »

Hersman said the NTSB has recorded eight accidents and one "incident" involving Liberty, but Saturday's crash was the first to involve fatalities.

In 2001, a Liberty pilot made an "improper decision" to continue flying in poor weather at night, causing the helicopter to hit trees, according to the NTSB.

Marcia Horowitz, a spokeswoman for the tour operator, said Liberty executives "are cooperating fully" with investigators.

"Right now, the company is focusing its efforts on cooperating with the NTSB and giving as much information as it can," Horowitz said. "At this time, their priority is to help with the family of their pilot, and of course the families that were involved in the accident."

Investigators will focus on radio communications along the congested air corridor at the time of the crash and examine any pictures or video contributed by the public, Hersman told CNN earlier. Witness accounts and still photographs already provided "good information" to investigators, she said.

A witness told investigators he saw the airplane approach the helicopter from behind, and the plane's right wing make "contact with the helicopter," Hersman said. The witness, another Liberty pilot who was refueling at a nearby heliport, said he tried to warn the helicopter pilot but got no response.

Other witnesses reported seeing debris flying from the helicopter as it slammed into the water. Arnold Stevens, who saw the collision from the W Hotel in Hoboken, said the helicopter "dropped like a rock," while one of the plane's wings was sheared off and it began "corkscrewing" into the water, he said.

The busy airspace surrounding Manhattan has been the site of several recent aeronautical accidents.

Earlier this year, a US Airways plane with 155 people on board ditched into the Hudson after apparently striking birds upon takeoff from New York's LaGuardia Airport, officials said.

Capt. Chesley B. "Sully" Sullenberger's landing, which resulted in no deaths or serious injuries, was captured on closed circuit television.

In 2006, Yankees pitcher Cory Lidle, 34, and his flight instructor were killed when the ballplayer's plane crashed into a high-rise apartment building near the East River, city officials said.